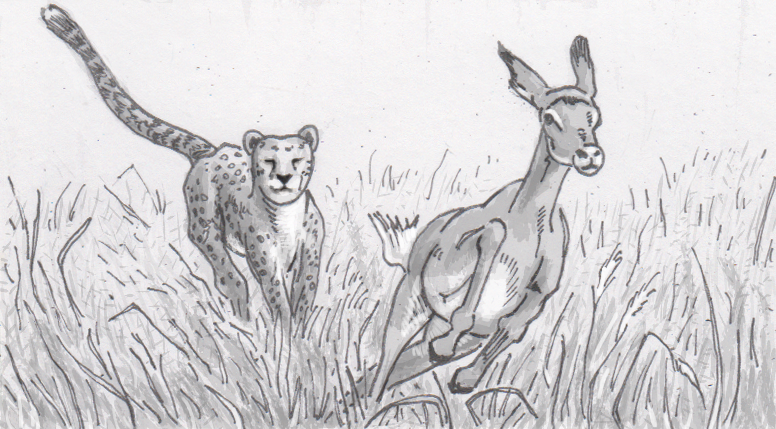 Cheetahs probably wish their favorite food was faster. This isn’t because they want to burn more calories during every hunt, or necessarily have some deep enjoyment of speed. It’s because the hardest impalas (Aepyceros melampus) to catch aren’t the fastest runners, but the individuals who move slower and less predictably. Rather than race the fastest runners on Earth past their 60 mile-an-hour speeds, evolution has taken prey species in a different direction, or rather, as many different directions as they can manage, in order to out-maneuver the cats that want to eat them.

To test the dynamics between predators and prey, lions, cheetahs, zebras and impalas were outfitted with motion-sensing collars. While none of the test subject directly interacted, researchers were able to use the compiled speed, acceleration and directional data to build a model about how each species interacts. What became clear was that a zebra or impala that tried to simply outrun a lion or cheetah respectively was doing the cat a favor— an animal running at top speed can’t change directions very well, nor can it adjust its speed to avoid the final lunge of a chase. Instead, the most successful targets moved at slower speeds, enabling them to dodge and surprise their pursuer. Outmaneuvering the cats effectively put the prey in the driver’s seat, greatly increasing their chances of survival.

The roles of size, speed and strength

This isn’t to discount the physicality of these encounters. A zebra couldn’t hope to outrun or out-maneuver a cheetah, but their relative size allows them to scare those cats away. An impala could simply out-run a lion, but is an attractive size for a cheetah to tackle. Even when properly matched up in these ways, the cats still hold an athletic edge over their targets, as they were on average 38 percent faster, 37 better accelerators, and pound-for-pound were simply more powerful, with 20 percent stronger muscles. This would be a hard evolutionary race for prey to catch up with, so it makes sense that they’ve come to survive by learning to swerve at just the right moments.

As much as an impala running at full-speed would help a cheetah out, there’s an upside for predators here too. Big cats catch around one-third of the prey they chase, which is apparently just enough to keep them healthy if hungry. This balancing point then helps avoid over-hunting a herd, which may fill a cat’s belly in the short-term, but could lead to a food shortage if the herd’s population is stressed too far. Even if they can’t see every facet of the relationship, it’s probably good that these big cats can’t catch everything they chase after.