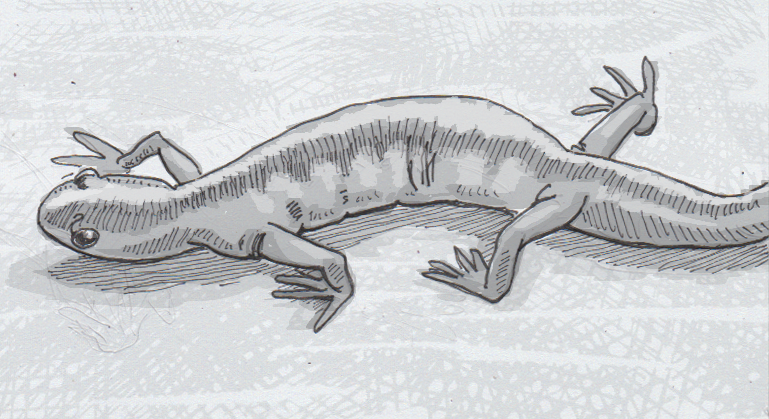 Having successfully navigated a long-distance relationship, I remember long, lonely journeys, sometimes literally across the ocean, to find my special someone. Midnight flights from JFK airport seemed sensible, even if they were followed by bus rides and more just to be together for a few days at a time. That said, something about a 75 mile walk on short legs with sensitive feet somehow sounds… well, a bit less romantic, shall we say? As long as some of those flights and buses felt, they were decidedly more practical than what small-mouth mole salamanders are willing to do for a date, making these amphibians some of the most dedicated suitors of the animal kingdom.

To clarify, small-mouth mole salamanders (Ambystoma texanum) are usually no more than seven inches long, and they’re not walking a literal 75 miles at a time to find a mate. They’re traveling the scaled equivalent though, trotting along for hours, sometimes going as far as nine miles before basically passing out from exhaustion. Scientists were able to come to these figures by observing the salamanders walking on custom, amphibian-friendly treadmills, where they could be checked on, moistened and have their mileage verified by equally dedicated graduate students.

Not always worth the walk?

Not every salamander is that passionate about finding their mate on foot, because not every small-mouth mole salamander even looks for one. Their population is split between sexually reproducing males and females, and a set of asexual females. Those females can reproduce, but they don’t bother with seeking a mate, since they can instead make due by either cloning their own genome or by taking advantage of some ‘misplaced’ sperm that can occasionally be found in the their forested environment. Without the need to search for other eligible singles these females were also found to have less walking endurance, giving up after no more than six hours on a treadmill.

So which population is more successful? The mate-seeking salamanders were a genetic minority in sampled populations, but they clearly have some physiological advantages over their asexual kin. Sexual selection allows for genes to be recombined in new ways, adding to diversity in species. In general, this helps keep species from being too vulnerable to any single pathogen or disability, since each animal has slightly different predispositions towards different diseases. In the small-mouthed salamanders, this may also be allowing for more robust physiology, giving them the strength and endurance to making these monster treks to look for equally sporty mates.

Source: Salamanders on Treadmills Show They Can Walk Extreme Distances to Mate by Amanda Onion, Seeker