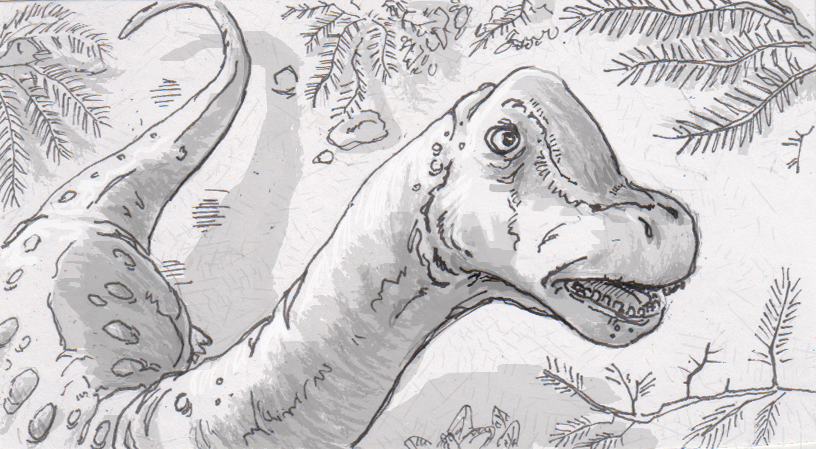 Mansourasaurus shahinae was only the size of a bus, probably weighing around five tons when it was alive 80 million years ago. That’s nothing to sneeze at, but it’s certainly not a record-breaker among its titanosaur relatives. Like other dinosaurs in this family, it sported a small head, long neck and small bony osteoderms on its back. Nonetheless, the discovery of M. shahinae is turning heads, not because of any unusual anatomy, but because of the place where it was found. It’s the seventh titanosaur from Africa, and only the sixth dinosaur species ever discovered in Egypt. As such, these fossils represent a relatively huge expansion of our understanding of African ecology in the late Cretaceous period.

M. shahinae was found in the Sahara desert, but certainly was not the only dinosaur living there. While Africa was habitable throughout the Mesozoic era, little is known of the animals that lived there thanks to a dearth of fossils. Much of the continent lacks the crisp, cliff-filled geology paleontologists benefit from in areas like the South Dakota Badlands, which often expose fossils from ancient layers of rock. Instead, much of Africa is covered in vegetation, making excavations much trickier get started.

No signs of African isolation

Fortunately, the fossils the team from Mansoura University found were in good condition. While there wasn’t a full skeleton, enough of the animal was preserved to clearly place it in the titanosaur family tree. As it turns out, M. shahinae’s closest known kin weren’t from Africa. The morphology of the available bones indicates that this dinosaur was more closely related to dinosaurs from Europe, not southern counterparts like Shingopana songwensis of Tanzania. M. shahinae, or rather its ancestors, must have had some way to access Europe.

This relationship then confirms a long-held hypothesis that Africa was connected to Europe and Asia by the Cretaceous period, similar to the geography of today. This may seem obvious from our modern perspective, but geologists know that the world’s continents were being considerably reshaped throughout the Mesozoic. Earlier on, most of the Earth’s land masses were clumped together in a huge super-continent known as Pangea. As the continents broke apart, it wasn’t clear when an animal living in Africa would necessarily have access to places like Europe, leaving a definite chance that dinosaurs like M. shahinae would have actually been geographically isolated. The similarities to European dinosaurs found in M. shahinae‘s fossils then provide critical evidence for this question, certainly making it a bigger discovery than the simple sum of the animal’s parts.