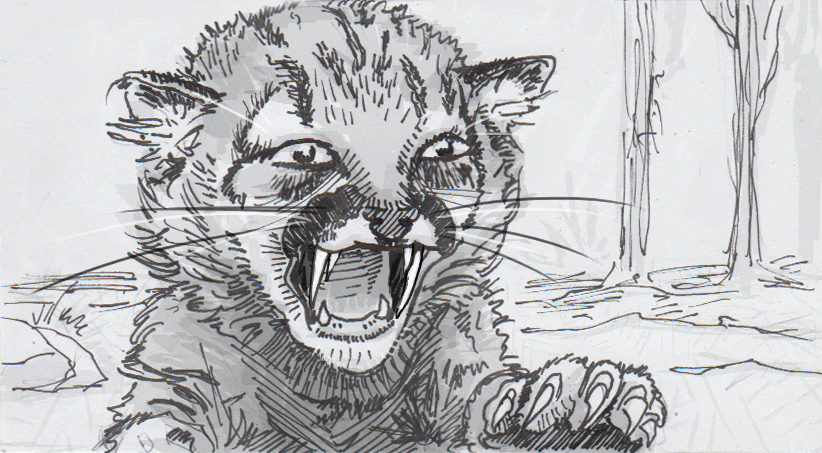 When my first grader was losing her first tooth, the adult tooth that was to replace it didn’t really wait its turn. The baby tooth at the front of her jaw was wiggling and moving out of the way, but the adult tooth was nearly a quarter of the way in before space was actually cleared. What we felt was an extend snaggle-toothed period was nothing compared to what some young mammals experience with the loss of their baby teeth. Appropriately, one of the most extreme examples of this kind of overlap also had the most extreme teeth: Smilodon, the saber-tooth tiger.

A plethora of fossil skull specimens found in the La Brea Tar Pits in Los Angeles, California, have let paleontologists see many stages of Smilodon skull development. One of the big changes in the cat’s life was the eruption of its signature canine teeth, which famously reached lengths of up to 11 inches. Fortunately for their mothers, Smilodon kittens were only born with more daintily-proportioned milk teeth, although even those are estimated to have grown at six millimeters per month.

Interestingly, around  11 months into the cat’s life, it started growing its striking canine teeth next to it’s milk teeth. In a much more elegantly arranged formation than my daughter’s experience, the adult and baby canines grew side-by-side for another 11 months. Skulls show such a tight formation that researchers hypothesize that the baby saber-teeth may have acted as guides or struts for the longer teeth while they grew in. It wasn’t until the animal was about three years old that a Smilodon would have a mature set of teeth.

This lengthy maturation process wasn’t through lack of trying. The growth rate of the teeth themselves was actually very fast, its just that that had so much tooth to grow. That length of time may have meant that Smilodon kittens depended on their mothers or a larger family group until they could participate in larger hunts. This could be an explanation for why so few young Smilodons are found in a location like the La Brea Tarpits, which was thought to be a prime hunting location back in the Pleistocene.