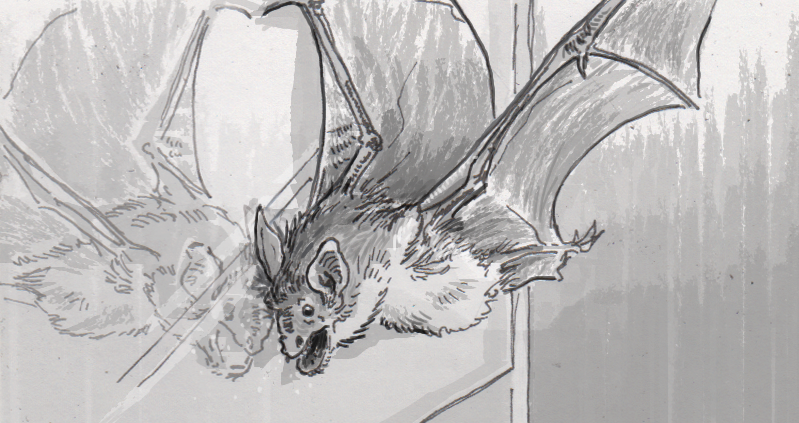 My third-grader still recalls, with an odd amount of fondness, the last time she walked into a glass door. The smooth, clear glass had no hints of grime or glare to describe it’s surface, and she smacked into it at full speed. Birds famously do this too, but it’s been a little more puzzling why bats have the same problem with glass-covered buildings. When the bats are out at night, windows usually look like dark monoliths more than clear openings, but that only helps if you navigate primarily with your eyes. If you find your way around the world with echolocation, all that glass becomes invisible in a whole new way.

An absence of echoes

Similarly to the way your eyes detect light bouncing off of the objects around you to see, bats listen for sounds to understand where they are and what’s near by. Rather than relying on other sources of sound, they squeak at ultra-high frequencies humans can’t hear, and as those sound waves reflect off of objects, the bat can gauge their timing and amplitude to know where the next rock, tree or insect is located. When sound doesn’t reflect back, it’s usually a fair assumption that there’s open space in that direction. Unless of course there’s actually a building there.

A series of experiments looked at how greater mouse-eared bats (Myotis myotis) maneuvered in the vicinity of a smooth piece of flat metal, set up as an analog for glass plate windows. The metal, and glass, can be so smooth that incoming sound waves don’t scatter back to the bat— they simply reflect off at a complementary angle like light from a laser pointer on a mirror. While bats aren’t blind, the lack of feedback from their primary sensory system leads them to fly at full speed into these objects, often leading to injuries or even death.

The one exception to this is when the metal plates were placed on the ground, as their context suddenly changed how bats interpreted the apparent void in front of them. While most objects in a bats natural habitat are rough, bumpy or at least uneven enough to reflect sound, still water can apparently be smooth enough to bounce no sound back to the bat’s ears. When metal plates were placed horizontally on the ground, bats would try to skim their surface for a drink, even from a young age that couldn’t have been taught this kind of behavior. This misunderstanding is what got researchers looking at how smooth surfaces confuse bats in general, hopefully getting us closer to a strategy to prevent some of these collisions.

One possible course of action would be to build acoustic deterrents on buildings near large bat colonies. Since bats operate in ultrasonic frequencies invisible to our ears, speakers could emit sounds from buildings to essentially broadcast their locations to the flying insectivores. The smooth, vertical surfaces would then be revealed, or at least advertised as a place you shouldn’t try to fly through when chasing down bugs.

Source: Bats crash into windows because of a glitch with their ‘sonar’ by Michael Le Page, New Scientist