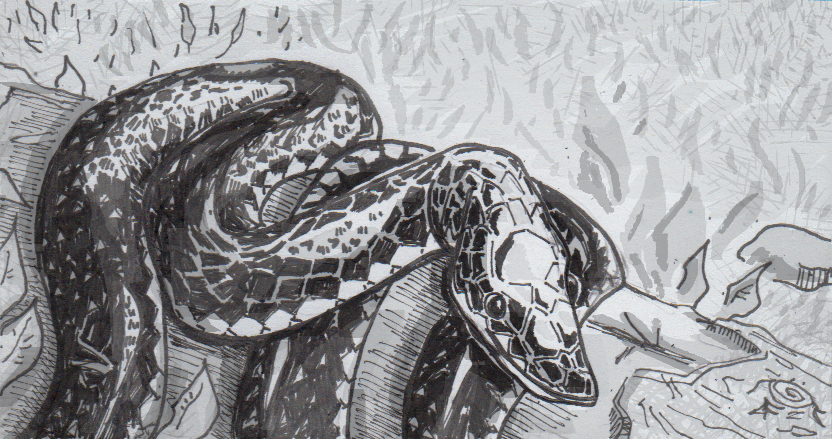 What compels a species to give up its limbs? This question has been central to the origins of snakes, which we know branched off from tetrapod lizards millions of years ago. The leading hypotheses assume they were moving either through water or through dirt, but it’s hard to study the absent limbs for clues. Instead, paleontologists have started looking at structures have been presevered, like the snakes’ heads, or more specifically, their inner ears. By comparing them to modern animals with known habitats, it seems that early snakes were digging in the dirt, piling more evidence on the “burrowing” line of reasoning.

Snakes use their inner ears for hearing and for equilibrium. Much like humans, structures in the ear move to indicate the direction of gravity’s pull, establishing which was is up and which way is down. This is obviously useful for burrowing animals, who have to give up a variety of other sensory inputs, like sight and smells, to figure out which way is up when pushing through the dirt. Since sound is one sense that is also reliable underground, many burrowing snakes alive today have unusually large vestibule structures. Aside from greater sensitivity to the animal’s physical orientation at any given moment, these structures would help the snakes hear the low-pitched sound that best resonate through materials like dirt. In comparison, modern snakes and related lizards that live in water or on land lack these enhanced ears since they don’t provide much of an advantage in other environments.

With these reference points in mind, researchers compared the spectrum of modern herptile ears to ancient snake ancestors, like Dinilysia patagonica from the Cretaceous period. This six-foot reptile had inner ears consistent with a modern, burrowing snake, indicating that digging through the dirt was a significant evolutionary pressure. As a check against confirmation-bias, they created predictive models based on the collected skull data. Those models found that D. patagonica was a 93.4 percent match to burrowing criteria, as expected. Going further, the models expected that the as-yet-undiscovered ancestor of ancient snakes was likely a 70.1 percent match to burrowing animals, versus only 0.02 percent match to aquatic animals.

While this study doesn’t touch on when snakes lost their limbs directly, it does strongly support the notion that the earliest snakes were burrowing after small lizards and mammals, rather than swimming after fish. With that idea in mind, it’s easier to build further hypotheses about what advantages these predators would have had by losing or at least minimizing their limbs.