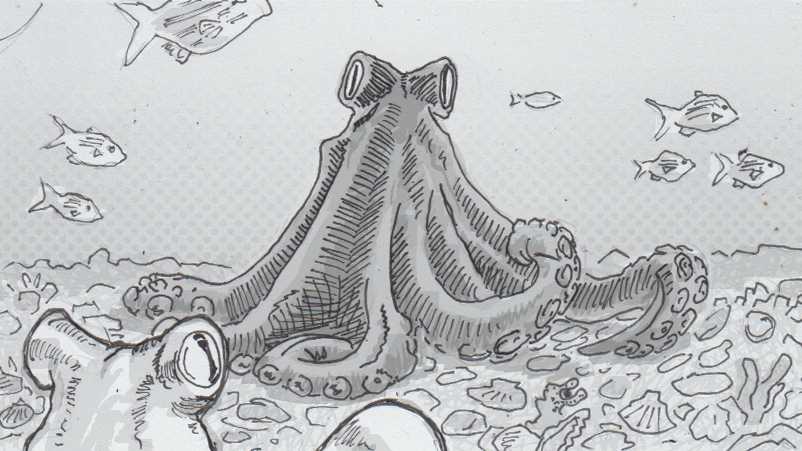 How do you know when an octopus is unhappy with you? It’s probably not a question humans need to concern themselves with very often, and for a long time we assumed that octopuses didn’t either. If there was a conflict between the eight-legged cephalopods, they could sort it out by blowing debris at each other, or maybe just eating each other. Inter-octopus Relations in Jervis Bay, Australia seem to be improving though, since instead of outright brawls as reported in August, the gloomy octopuses (Octopus tetricus) have been observed communicating their displeasure to each other, both through posture and coloration.

Crowded conditions in the bay, fueled by a glut of scallops for the octopuses to eat, have left real estate on the ocean floor at a premium. As the animals carve out pieces of territory for themselves, they’ve been using their amazing color changing abilities not for camouflage, but to communicate dominance and submission. From a batch of 186 interactions recorded in 52 hours of underwater video, octopuses on more than one occasion were seen turning a dark red color, then rising up on their tentacles to look larger and more imposing. In at least one case, the displaying octopus bothered to scramble onto a nearby object to increase their relative height, further punctuating the effect. In response, nearby octopuses generally turned a more blanched color scheme and moved away, or darkened themselves, holding their ground.

Octopuses usually use their color changing for camouflage, mimicking the color and texture of their surrounding environment. The dark red color and puffed up posture have the opposite effect, making the animal stand out as much as possible, eliminating any doubt that it’s not intentionally drawing attention to itself. This all might seem rather obvious, as many animals find ways to try to scare off competition for either food or mating opportunities. Octopuses, however, haven’t been thought to make use of social communication like this before, outside of some coloring to advertise mating opportunities. These behaviors add another layer of complexity to these animals, and show that they likely interact more than we’ve properly appreciated.

Source: Shifting Colors Of An Octopus May Hint At A Rich, Nasty Social Life by Nell Greenfieldboyce, The two-way