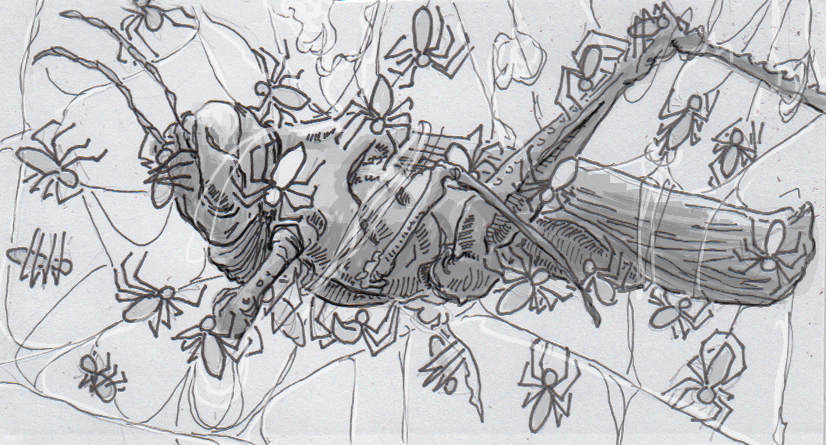 This isn’t the sort of thing I should share with my three-year-old, but sometimes sharing can be a terrible, horrible idea. Despite all the lessons one receives about fairness and generosity, there are cases where equally dividing resources can actually lead to the deaths of everyone involved. Of course, context counts for a lot here, and since nobody in my family is a member of the spider genus Anelosimus, it’s probably safe to keep pushing the kids to share their toys with each other.

Members of Anelosimus eximius usually do quite well living together. Young spiders aren’t compelled to leave home after they’re born, and as a result families of spiders share and build huge communal webs, often becoming home to around 1,000 individuals. This unusual arrangement is probably due to the spiders showing an unusual tolerance for foreign offspring, which has pushed the species from solitary to social. The benefit is that the communal web can catch larger prey, which then provides more nutrition for all the spiders than any could muster on their own. While it may seem like a winning combination, there may be good reason that we have not seen more spiders adopting egalitarian feeding habits.

The problem with sharing these larger spoils among webmates is that it works well, but not always well enough. The larger cockroaches and grasshoppers captured in the webs of A. eximius are equally divided among all parties, and can fuel population growth quite well as long as its consistent. However, if sufficient food isn’t captured, sharing the available morsels equally means that no spiders in the colony really get enough nutrition to carry on. Every spiders’ equal share may be fair, but it’s not enough to keep any of them alive, and as a result, colonies that were doing well for a while can quickly face collapse if the supply of food doesn’t keep up the growing number of spider offspring.

It’s estimated that 21 percent of A. eximius colonies die out due to generational population growth thanks to these feeding patterns. Capturing larger prey may be a bounty at first, but for a significant number of spiders it can also be a dangerous burden.