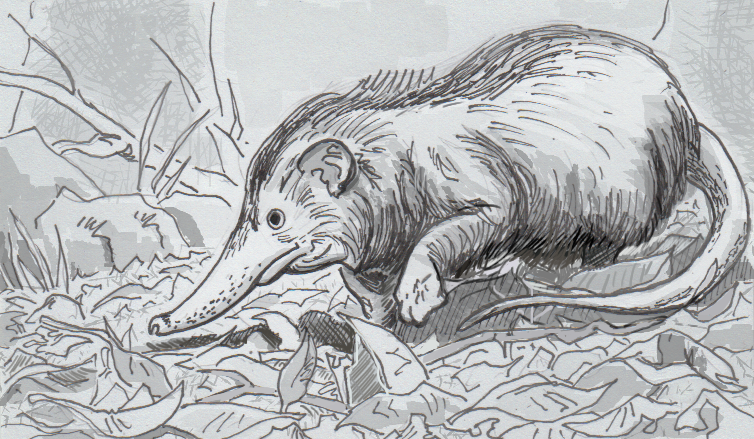 How do you get DNA samples of rare, endangered mammals that only exist on two islands on Earth? Apparently you lie on the ground at night and wait for the shrew-like creatures to walk across your body so you can grab them. When capturing a solenodon this way, make sure they don’t get a chance to dig into you with their “Freddy Krueger claws,” which are normally used to pry open rotting logs when foraging from food. It’s probably best to also avoid the animal’s grooved teeth, which can inject venomous saliva. Oh, and try not to be distracted by just how generally weird these critters are, because we’d really like that DNA sample.

It’s hard to describe a solenodon (Solenodon paradoxus) without sounding like a kid just making things up, trying to one-up their friends. The creature has a long nose like a shrew, but that snout comes on a ball-and-socket joint, making it very flexible and useful for sticking into crevices and logs to find food. These meals, often pried out of fallen logs, includes insects, worms, small lizards, vegetables, fruits and roots if their favorite bugs aren’t available. This prey, or any potential threats, are then subject to the animal’s venom, which is dangerous enough to at least kill another solenodon. If that weren’t enough for your average grade-schooler, the mammal has two nipples, which are located nearly on their buttocks, making for some obviously hilarious meals while the babies are nursing. If that all weren’t enough, they also grunt like pigs and smell like goats.

With anatomy like that, you’d think solenodons would be the pinnacle of evolution. Unfortunately, the nocturnal creatures have their downsides too. While well adapted for nighttime activity with strong hearing, touch and smell to make up for their tiny eyes, they’re not terribly deft athletes. For ages, they’ve lived on the islands of Cuba and Hispaniola without real predators to worry about, so when humans arrived bringing cats and dogs, the small, bizarre natives were ill-prepared for something as simple as running. They apparently run on their toes in a zig-zag pattern, frequently getting tripped up and falling over at top speed. If that doesn’t work, they’ve been known to just freeze, hide their head and hope for the best, which may be a weakness researchers should have exploited more when hunting for their DNA.

Mammal of the Mesozoic

Whatever method was used, the DNA was worth it. To be more specific, researchers recently gathered and sequenced mitochondrial DNA, which is (usually) passed from mothers to their offspring without changes being introduced from a father’s side of the family. As such, mitochondrial DNA can be used to trace back the lineage of an organism, finding key junctions in the species’ history. In this case, the key moment researchers uncovered took place 78 million years ago, when solenodons split from other mammalian ancestors. Other studies put that split close to 76 million years ago, but either way it means that this strange creature’s family tree was birthed in the time of dinosaurs.

So what you have is one of the most distantly related mammals on Earth, which can barely run in a straight line, somehow surviving the extinction event that wiped out 75 percent of life on the planet. So while solenodons may come off like a weird joke, there’s a chance that they’re the ones laughing. Even if they smell like goats and nurse from their mom’s butt.