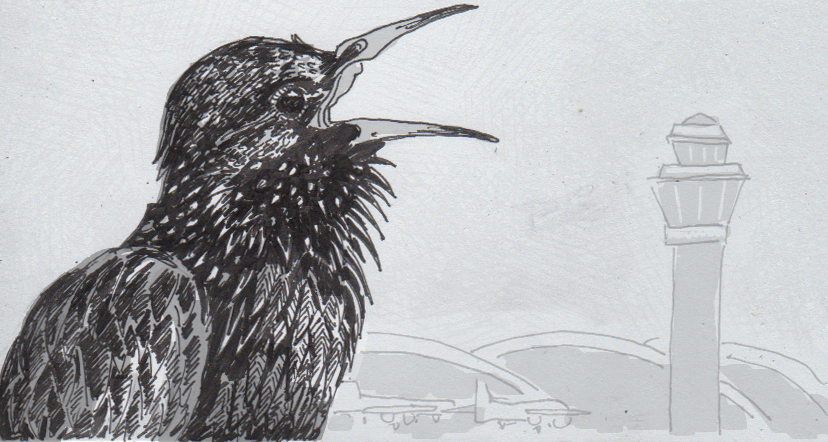 Sonic nets are sound-based scarecrows that break up bird babble

For centuries, humans have been trying to find ways to control where birds can fly. Since anything airborne can ignore a fence, people have often resorted to trying to scare birds away from their farmland or other sensitive areas. Sedentary objects like scarecrows aren’t terribly useful, but a moving scarecrow, like a kite, can only do so much. Even leveraging the birds’ natural behavior, such as recordings of warning calls, has proven to be a temporary repellent thanks the birds’ ability to learn and become desensitized to these artificial stimuli. The latest innovation also uses sound, but it isn’t trying to scare the birds. Instead, the goal is to make an area generally annoying enough that they’ll find it uncomfortable without giving them any specific ‘scarecrow’ to learn to ignore.

The technology being developed has been dubbed a “sonic net,” although it not so much imitating a net as it is background chatter. The sounds being played are based on bird chatter and squawks, so that they’re basically indistinct to the birds experience, However, they’re tuned to make the birds’ actual communication hard to hear and decipher, like trying to talk in a room crowded with many competing conversations. If it becomes too laborious to hear what a neighbor is saying, the birds should be motivated to fly to a less congested area.

Initial tests of these sonic nets have been notably successful. Open fields with food saw 50 percent less bird activity if these sonic nets were deployed. More importantly, when used at the Fort Eustis airfield, there was an 85 percent reduction in bird traffic over four weeks. This is great news for people looking to reduce bird-aircraft collisions, which currently cost the humans $900 million a year in damages, to say nothing of the birds’ outcome in these incidents. The greater efficacy may speak to the birds being more wary of the airfield environment already, making them more sensitive to the loss of communication.

While many birds have amazing eyesight, many species are remarkably dependent on sound for sharing information about the food sources, local predators and potential mates. Bird songs can be very sophisticated, and the development of sonic nets may be demonstrating how much birds value habitats where they can communicate freely. In the same way that humans, as visual animals, seek out good views when possible, it’s likely that these birds are looking for tweet-friendly audio-landscapes. These preferences may be strong enough that the birds won’t be able to learn to ignore the targeted disruptions of the sonic nets.