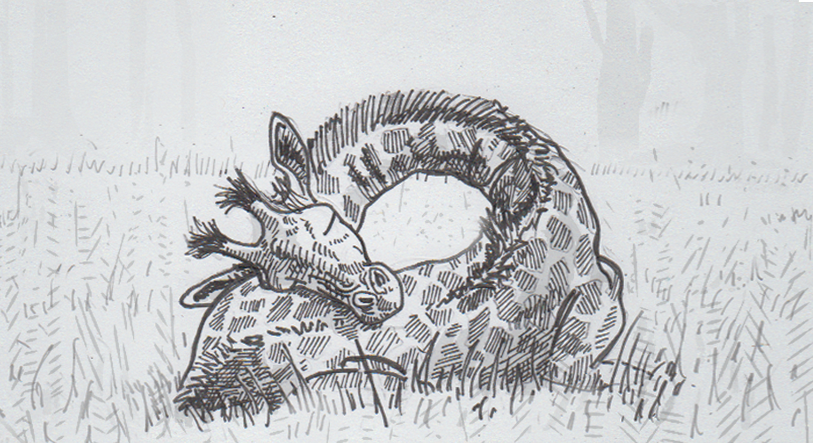 Sorting out the sleep, snoozes and snores of the animal kingdom

If estimates are true, I could really stand to sleep more like a giraffe. The large mammals are thought to only sleep five to 30 minutes a day, which would leave me with so much more time for reading up on weird animals to share with my kids. However, it’s hard to really be sure of this estimate, because figuring out how long animals sleep is actually quite difficult. Even when we’re lucky enough to observe an animal at rest, a bit of shut eye isn’t always the same as catching 40 winks.

We have some patterns to help guide our observations of sleep. Herbivores on average need to sleep less than carnivores. This isn’t because they’re just more efficient dreamers, but that they need to spend more time awake to ensure they can get enough energy each day from their lower-calorie food. They also need to keep an eye out for those sleepy predators. Conversely, a carnivore can go further on a single meaty-meal, but they often break their sleep up into shorter segments of time to make sure they’re not snoozing when their prey is walking by.

These baseline assumptions don’t necessarily help figure out when an animal is really asleep or not. Giant armadillos (Priodontes maximus) were thought to sleep 18 hours a day, but that was based on how much time they were in their burrows each day. They probably weren’t up reading a book, but the proximity of their sleeping chamber to their termite-mound-food source means there may have been some undetected activity in all that time. Some animals are a little more obvious, since they’ll adopt a special posture to sleep, such as a giraffe resting its head on its rump for a pillow.

The best way to be sure an animal is asleep is to measure their brain activity with an electroencephalograph (EEG). This can see what phase of activity your brain is in, such as Rapid Eye Movement (REM) when you’re dreaming. But even studies. However, the act of outfitting a test subject with an EEG can distort measured sleep as well. In most cases, measurements with EEGs were performed in a controlled laboratory, which likely had different smells, temperature and other stimuli from the animals’ normal sleep environments.

In some cases, the animal may not have been sleeping, but instead entered a state called torpor. Torpor is a special low-energy state for animals, like sleep-mode on your laptop. A more familiar term is hibernation, which is torpor in cold environments (versus aestivation in warm environments.) In general, these animals not only lower their brain activity, but also their metabolism and temperature as well, all to save energy.

There have been some studies with remote EEG devices to help keep things as comfortable for the test subjects as possible. A study of captive brown-throated sloths (Bradypus variegatus) pegged them at sleeping 15 hours a day. The updated study using wild sloths shaved that down to 10 hours a day, which is a pretty significant difference. It’s also still a significant amount of sleep, especially for an herbivore.

Source: by Ella Davies, What is the sleepiest animal on Earth?