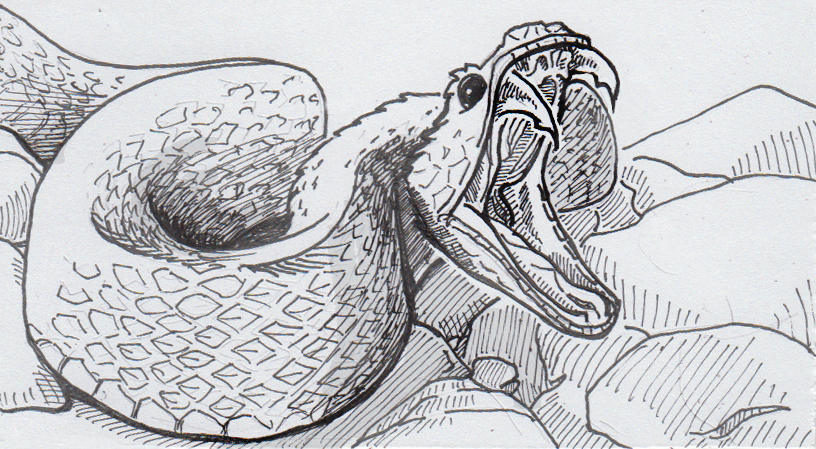 Sorting out when exactly snake fangs evolved to be so scary

Not to undersell the gravitas of a 500-pound anaconda, but most people’s initial image of a ‘scary snake’ involves a view of some very specialized fangs. We’re not wrong to be concerned with the fangs of cobras and vipers, since these highly evolved teeth can pierce and deliver potentially fatal venom with an impressive degree of efficiency. Of course, any threat severe enough to have possibly influenced the evolution of other animals didn’t happen easily, and in the case of venomous snakes seems to have involved two major milestones: moving venom-delivering teeth to the front of the mouth, then transforming those teeth into tubes.

It’s forgivable if you’ve never noticed how many teeth the average snake has, especially if you’re distracted by bigger fangs right up front. Those fangs, as venom-delivery devices, were once located in the back of the a snake’s mouth, closer to where the venom producing glands are located. Some snakes, like the boomslang (Dispholidus typus), still carry their relatively inefficient fangs at the back of their mouth, meaning they have to open their jaws as wide as possible before gnashing on their prey to deliver otherwise potent venom. It can work, but around 60 million years ago, the shared ancestor of vipers and cobras made a pretty big improvement on this arrangement.

Looking at developing snake embryos, researchers noticed that fangs first develop at the back of the mouth in every species. However, cobras and vipers then have a second key stage thanks to mutations on the Sonic hedgehog gene, where the fangs basically become uncoupled from the other teeth, migrating to the front of the mouth. This is partially thanks to that section of the jaw growing faster in these snakes, “moving” anatomy around relative to other parts of the mouth. It was apparently a successful enough shift to warrant dropping other structures, mainly the front row of teeth that used to occupy that part of the mouth.

This was only one part of snakes’ predatory prowess though, since the original, primitive fangs weren’t the venom syringe we see in modern animals. Fossils have proven that snakes had modern, tube-shaped fangs by the Miocene period, between five to twenty million years ago, but things are a little murkier before that. There isn’t a lot of evidence about the development of enclosed teeth, but we do know that snakes and other reptiles were toting venom in their mouths as far back as the Triassic period, around 200 million years ago.

Uatchitodon was a genus of carnivorous reptiles known only from their teeth, but their teeth tell us a lot. An older species, Uatchitodon kroehleri, likely delivered venom with grooved teeth, like a modern gila monster (Heloderma suspectum). Rather than piercing and injecting venom, these teeth require a bit more mashing to deliver the toxin to its target. A later species, Uatchitodon schneideri, known only from one tooth, seems to have made the leap to tubular teeth though, possibly providing this evolutionary upgrade to snakes before they moved their fangs to the front of their mouth.

Without more fossilized snake fangs, it’s hard to say for sure, but looking at the growth of replacement fangs, there is a developmental stage where fangs grow first with grooves, then cover seal those grooves up to make venom-delivering tubes. This developmental sequence makes sense, because a groove could still carry toxins well enough. The evolutionary progression of these teeth makes it clear that snakes haven’t been willing to settle for good enough though, pushing these two teeth as dangerous as possible.