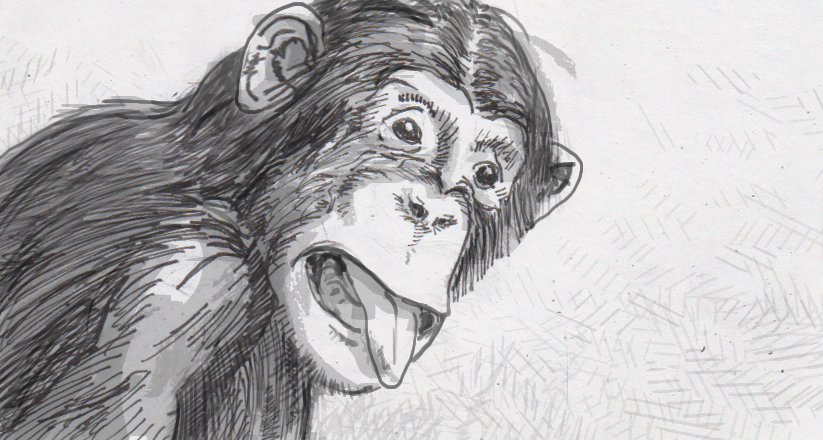 Sorting through the spectrum of what chimpanzees regard as repulsive

You might not want to eat while reading this. According to a recent study that aimed to gross out chimpanzees, text probably isn’t enough to trigger the sense of disgust we’ve inherited from our ancestors. With that said, stories that bring up the issue of coprophagia, or eating feces, probably isn’t great for one’s appetite. At least not a first.

Digging into the details of disgust

Researchers were investigating where chimpanzees, as our closest genetic relative alive today, draw the line with what they’ll put in their mouths to eat. That line certainly wasn’t clear from the outset, as wild chimps will pick seeds out of poop to eat, and captive chimps will go a step further and snack on their poop outright. Researchers learned that there was some nuance to chimps’ consumption of crap, as the animals apparently evaluate feces based on genetic familiarity. A chimpanzee will eat their own poop, or that of closely related family members, but any other chimps’ waste elicits a clear display of disgust.

With that baseline established, researchers set up experiments to further probe chimpanzees’ criteria for when food is too revolting to eat. In one scenario, food was placed in an opaque box, either on top of soft but edible dough, or on top of a piece of rope. Chimps reaching in for the food were obviously repulsed by the soft, moist dough, yanking their hands out of the box as if it bit them. Other tests involved food being placed on what looked like feces, or near the scent of blood, and while no response was apparently quite as disgusting as something soft, wet and squishy, the chimps seemed to have similar guidelines for what was gross that humans do. They didn’t necessarily have the same standards though, as they would sometimes end up eating food from disgusting sources, but overall their criteria was pretty relatable.

Finding the value in what chimps find foul

The fact that these chimpanzees get grossed out like we do may seem obvious, but it wouldn’t have been safe to automatically assume they operated on similar criteria to humans. After all, any degree of coprophagia is probably too disgusting for humans to seriously consider, and researchers wanted to see exactly what our species had in common with our fellow primates. Avoiding substances, like poop or blood, that could easily harbor pathogens makes sense as a survival tactic, and identifying commonalities indicates that chimps and humans likely inherited some of these reference points from a shared ancestor. This work may also help zoos and conservationists manage the health of chimpanzees in their care. Dangerous substances can be presented in a more disgusting manner, and individual chimps that seem too casual about gross sources of food can be given extra attention for exposure to pathogens.

Source: What grosses out a chimpanzee? The origins of disgust by Kyoto University, EurekAlert!