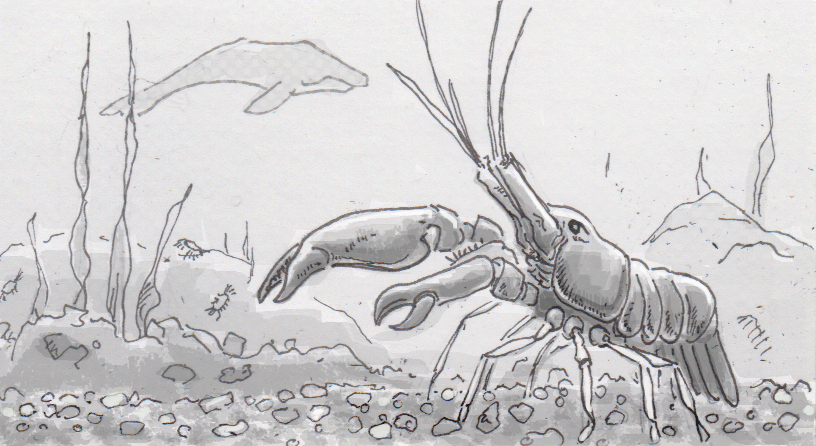 The sounds of snapping shrimp used by scientists, and whales, to estimate the abundance of coastal wildlife

Your alarm clock may play soft, soothing sounds of distant waves to help you nod off to sleep, but you’re only getting a tiny portion of the cacophony of noise echoing through the ocean. From whale greetings to acoustic gravity waves, there are a lot of vibrations moving through the water. Researchers are learning to listen in more carefully, as these sounds are a great way to monitor what’s happening in underwater ecosystems, although they may be a bit late to the party. Some studies are finding that the residents of the ocean, like Pacific gray whales, may regularly be tuning into specific sounds as indirect indicators of where to find a bite to eat.

Popping as a population proxy

One of the louder sea creatures capturing human and cetacean ears is the snapping shrimp. Like its infamous cousin, the mantis shrimp, this crustacean can snap its claw shut so quickly that it causes a tiny, temporary vacuum in the water, called a cavitation bubble. That bubble then collapses, releasing a lot of energy in the process, hopefully stunning the shrimp’s prey so it can capture its dinner. Like less dramatic bubbles, the bubbles also make a loud popping noise that can be heard from a considerable distance away.

When enough snapping shrimps are hunting at once, these pops start to sound like a bit like something sizzling and splattering in hot oil. Because it’s coming from groups of shrimp hunting at once, researchers have started using the sound to estimate shrimp populations and activity levels. For instance, summer waters off the coast of North Carolina see a 15 decibel increase, as shrimp crackle and pop up to 2,000 times a minute. In the winter, they calm down considerably, with no more than 100 pops being recorded in a minute.

Snapping shrimp surprised researchers off the coast of Oregon when they dipped a hydrophone into the water. The shrimp were previously unknown in the area, and yet they were clearly turning up in sizable numbers in researchers’ recordings. What’s more, the researchers apparently weren’t the only one’s listening for snapping shrimp, as Pacific gray whales often turned up when the shrimp started hunting.

The whales weren’t following the popping sounds to eat the shrimp though, as the noisy crustaceans just aren’t part of their diet. The best guess at this point is that the whales understood that the shrimp’s activity meant there was other food nearby. Since so much of the ocean is essentially devoid of food, following the sound of the popping bubbles saves the whales a lot of trouble. They’ve learned that when the shrimp are hunting, there’s probably something for whales to eat in the same location. With whales’ keen sense of hearing, the noisy bubbles must be hard to ignore.

Like those whales, ecologists are looking to figure out just how reliable a signal the snapping shrimp can be. If they’re consistent enough, listening for the sound of shrimp bubbles may be a relatively quick and inexpensive way to assess the health of coastal ecosystems, and maybe find some hungry whales at the same time.