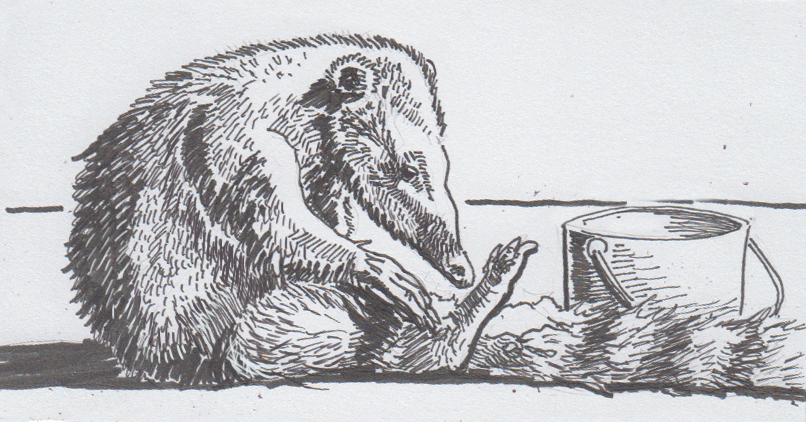 Coatis, sometimes coatimundi, are furry relatives of racoons that live in Central and South America. The cat-sized omnivores have long snouts and tails, and at any given moment are likely to smell like limes, onions, millipede or even soap. This isn’t an accident, but the result of some diligent scrubbing and swabbing by the coatis, depending on what items are available at the time. And they even wash up without their parents nagging them first.

Slathering on the smells

This behavior is called self-anointing, and happens more than we might think. Various primates take advantage of their grasping forelimbs and rub various smelly or secreting items on themselves, presumably as insect repellents. Millipedes, for instance, secrete compounds that may repel mosquitoes or ticks, although the effectiveness of a good lime-juice rub is less clear.

Beyond primates, various deer, goats, dogs and more will make a point of rolling in fragrant substances, although less likely as a form of self-medication. The smell of a carcass, a favorite of dogs, probably isn’t going to scare off too many insects. Instead, dogs may be soaking up the smell to either mask their own odor from possible prey, or just to carry evidence of their find back to their peers later on.

A particular tribe of coatis (Nasua nasua) on an island near Brazil seems to have started specializing in their self-anointing rituals. Living near a tourist complex, the coatis have been in proximity of human hygiene products for at least 10 years, and the social group seems to have developed preferences for our soaps and detergents. The free-roaming coatis had the option to interact with a variety of natural materials, but when given the option of bar soaps or sudsy laundry soap, they were observed making use of those items at least 15 times. Coatis usually cleaned themselves up, but were also seen scrubbing each other from time to time.

Even though this batch of coatis have borrowed our cleaning products, they don’t seem to be mimicking how humans use them exactly. Rather than washing their paws at a sink, they were seen chewing the bar of soap to make a lather, then working that lather around their tails and genital area. This anatomy is probably being targeted for being especially warm and moist in the Brazilian heat, and so the soap might be helping relieve irritation from infections, or even kicking off some bacteria. Since rinsing the soap doesn’t seem to be part of the coatis’ cleaning regimen yet, the slathered soap may also make it harder for ticks targeting the coatis’ skin. Perhaps it’s time to offer them some conditioner?