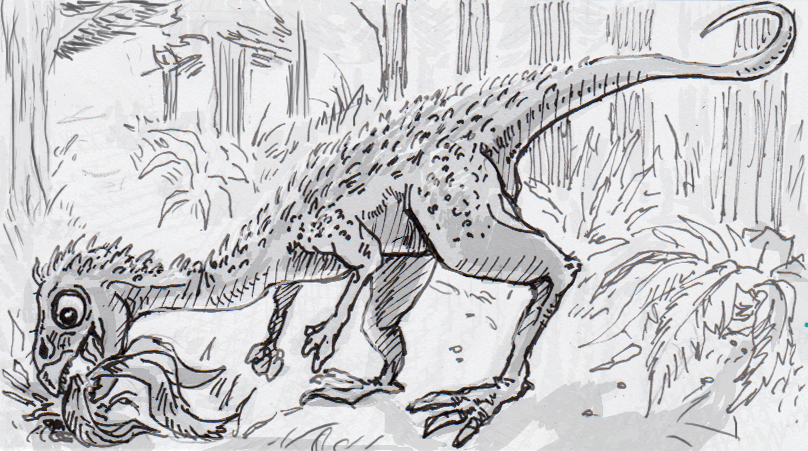 In 2004, a seven-year-old Diego Suarez pretty much topped off any kids’ bucket list when he discovered not only fossils, but a whole new species of dinosaur. While on hike with his parents and sister, he found the first ribs and vertebra of what has now been named Chilesaurus diegosuarezi. And in case that wasn’t all enough, this new theropod will not be easily forgotten, as it counters a number of expectations for this lineage of dinosaurs.

Chilesaurus follows a few theropod conventions. It walked on two large legs with 3 clawed toes, using a tail for balance. It’s forelimbs were smaller, in this case with short, stubby claws. But that’s were the conventional wisdom about this class of generally predatory animals ends. Chilesaurus had an unusually long neck for a theropod, not matching the thick musculature of hunters like a tyrannosaur. This wasn’t a big problem because his mouth was short and ended in a blunt beak-like shape. More importantly, it didn’t contain the usual teeth primed for slashing and tearing. Instead they were leaf-shaped, much more akin to those found in stegosaurs or a Plateosaurus. Chilesaurus wasn’t a fearsome hunter, it was an herbivore.

“If it didn’t eat meat, was it still a theropod?”

It doesn’t take much exposure to dramatized dinosaur fiction (or even non-fiction) to start thinking of theropods as aggressive, flesh-eating predators. But eating meat is not a requirement for theropods, as demonstrated by fish-eating spinosaurs, omnivorous troodons, herbivorous therizinosaurs, or any of the birds alive today with their great variety of diets. This isn’t to say that Chilesaurus isn’t an interesting herbivore though. There’s a chance that, at 150 million years old, it’s the oldest known case of a herbivorous theropod. It also seemed to play a surprisingly prominent role in its local ecology, as after young Diego’s initial discovery, many more specimens were found, indicating they were a dominant force in their Jurassic neighborhood.

My kindergartner asked: So did other theropods prey on Chilesaurus then? While this wasn’t explicitly stated, and while South America wasn’t home to the biggest predators during the Jurassic, something like a 14-foot-long Piatnitzkysaurus could have probably posed a threat to the 10-foot Chilesaurus.