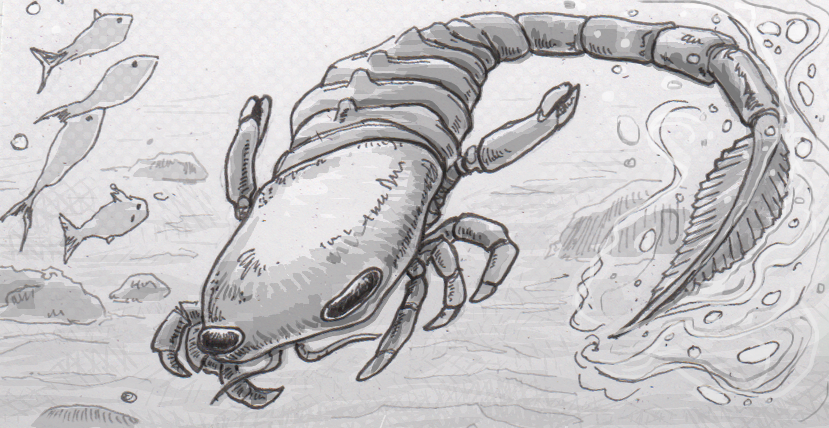 Specializations of a sea scorpion’s tail suggest it was used against prey, not as protection

While most of the modern ocean’s celebrity species are vertebrates, like sharks, rays, whales and seals, there was a time when much more of the food chain was commanded by armored eurypterids. Eurypterids, also called “sea scorpions,” were early arthropods living around 450 million years ago that usually resembled a cross between a lobster, a shrimp and, well, a scorpion. Their segmented bodies were usually directed by a larger section for the animal’s head, navigating mostly on six to eight legs. There were a variety of Eurypterids, from smaller scavengers to six-foot-long predators, but it hasn’t always been clear how much their behavior matched the hunting techniques of an actual scorpion. A new fossil of Slimonia acuminata suggests that using a tail as a weapon is a trait that’s been in the scorpion family for a very long time.

Wielded as a weapon

Slimonia acuminata wasn’t the largest sea scorpion out there, growing to around the size of a modern lobster. It didn’t have much in the way of claws on it’s arms, or even spines on their feet. Their most outstanding feature was their tail, which was at one time thought to be a defensive apparatus, kind of like the tail clubs on plant-eating dinosaurs like Ankylosaurus. However, a fossil for a dramatically posed specimen is challenging that hypothesis, as S. acuminata’s tail seems too well equipped for fighting to have only been used for protection.

The tip of S. acuminata’s tail does not carry any way to inject venom like a modern scorpion, but it was probably still very bad news for prey. The tip of the tail flattens in to a pointed, flat blade, and was then further enhanced with tiny ridges and serrations. What’s more, the tail has been found to be highly flexible, and S. acuminata would have been able to whip the tip forward to attack, and possibly chop up, softer-bodied fish. In addition to providing a lethal attack, it may have allowed this moderately-sized predator to eat prey larger than it’s mouth, as the serrations would have enabled smaller pieces of meat to be carved off a body.

The tail’s flexibility had it’s limits though. While scientists found that it could snap forward far enough to reach in front of the animal, S. acuminata could only move it to the sides. Unlike a modern scorpion, S. acuminata couldn’t bring it’s tail forward over it’s head, or even up and down behind it. This is significant, because modern armored arthropods like lobsters can use their tails like a paddle to propel itself forward. Aside from some lateral swishing, S. acuminata‘s tail doesn’t seem terribly well suited towards forms of locomotion. It may have been only used as a weapon, leaving navigation only to the sea scorpion’s legs. Which is probably good news for everyone else living in the ocean at the time.