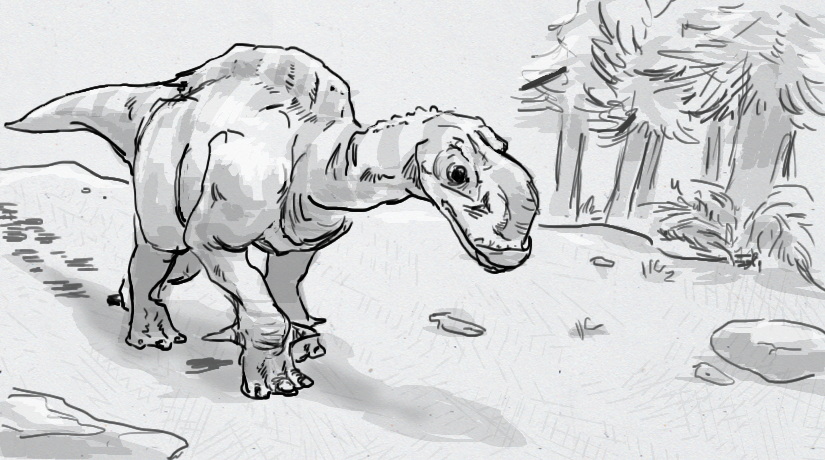 For a group of animals usually remembered for their thumbs, a new kind of iguanodontid is turning more heads thanks to its back. Morelladon beltrani was found in a Spanish quarry, and is thought to have lived some 125 million years ago, in the Cretaceous period. Exactly how it lived is a point of interest, thanks to the unusual spines coming out of its vertebrae. The wide range of possible uses of such spines, plus the novelty of the spines, point to a more diverse and layered ecosystem than previously understood.

M. beltrani was, in most respects, fairly representative of its family. The 20-foot-long herbivore was likely around eight feet tall at the shoulder, and moved about on four legs. For the most part it bore a strong resemblance to its local contemporaries like Iguanodon bernissartensis, aside, of course, from the spines.

Sizing up the spines

While dorsal spines have been seen on other dinosaurs, like Spinosaurus, M. beltrani‘s proportions differ enough to add some mystery about their purpose. They may have been part of a sail structure, like on Spinosaurus, but their lower stature would make for a shorter, less pronounced sail. It may still be have been enough to assist with thermoregulation, allowing the animal to warm itself in the sun, or shed heat in the breeze, but compared to some modern animals, the story gets muddled. A modern buffalo also has some large, dorsal spines in its vertebrae, but those help form the mammal’s notable hump, not a sail. Similar proportions don’t really prove M. beltrani was humped though, since camels, with the modern world’s most famous humped backs, aren’t built on bony spines in the first place.

Aside from providing intrigue for paleoartists, a hump or sail might be a clue as to how this dinosaur lived. Adaptations to cope with heat might mean that M. beltrani was dealing with shifts in its climate on a regular basis, which is supported to a degree by other fossil evidence. A hump, possibly storing fat and moisture, may point to even stronger concerns with shifting environments, and raises the possibility that this animal regularly migrated to find food or water. While a sail-structure could be useful for living on the road in shifting climates, a fatty hump could have provided a way for M. beltrani to carry nourishment along for the long haul, much like a camel does today. And of course, you can never rule out the possibility of sexual selection for ridged backs, since these preferences have lead to some amazing anatomy in many kinds of creatures.