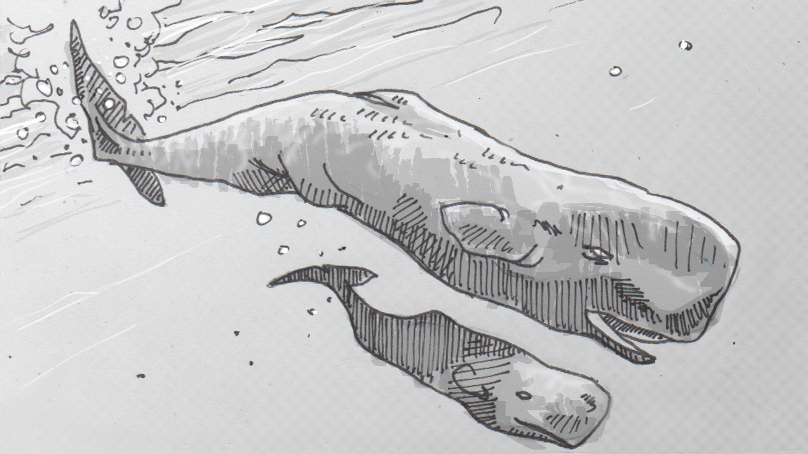 Clicking is crucial to sperm whales, as they use it to navigate and hunt for squid in the darker depths of the ocean. However, not all sperm whales (Physeter macrocephalus) click in exactly the same way. Even thought the fundamental needs and mechanics are the same, different whales have been found to ‘pronounce’ their clicks differently, depending on their familial and social peers. Each group then vocalizes with its own dialect, one that seems to be taught and learned, rather than inherited.

This may not seem significant, but clicking with a dialect crosses an important line for biologists. While the clicks themselves are possible thanks to the animals’ physical characteristics and thus their genes, the flexibility in how they click shows a degree of social interaction once thought to be beyond any non-human. A dialect that can be learned from other whales can theoretically pass down knowledge from one generation to the next, starting a second line of evolution beyond physical changes— the evolution of the whales’ culture.

What does culture cultivate?

One a small scale, differences in this type of culture can seem a bit frivolous. I was brought with the term “drinking fountain” while people in Wisconsin grew up calling the same devices “bubblers.” Importantly, these differences can reinforce your connections to people who do things the same way as you, and drive you away from those in other groups. For instance, when I first met someone who did grow up saying “bubbler,” they found it hysterical that I didn’t know what that word referred to. It was part of our respective identities.

On a more grand scale, cultured animals can pass down information to their young at a speed genes can’t compete with. A species doesn’t need to wait to adapt to a new environmental challenge if some of its members can instead share their ways to solve the problem. Humans have leveraged this concept in a multitude of ways, with written language being one of the most obvious examples. We know that some dolphins have learned to use sponges to help catch food, and teach this trick to their young, giving them a bit of a competitive advantage to find food, and saving the time of having to reinvent the technique from scratch.

The sperm whale clicks haven’t revealed any advanced hunting tricks yet, but they do seem to influence which whales associate with each other. Knowing this may help us better understand whale migration patterns, as whales that share a dialect will probably prefer to associate with members of their own family or clan. If these preferences become more pronounced, it may shape whale behavior even more. Hopefully whales steer clear of some human cultural pitfalls though, and manage to keep their differences in the range of click pronunciation only.