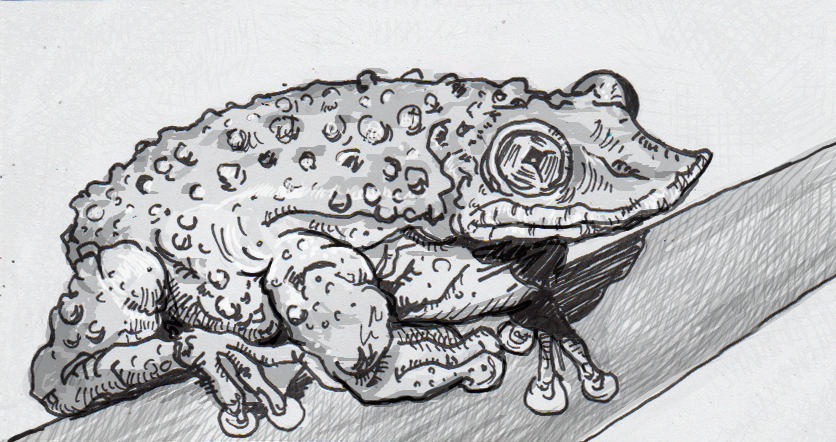 Imagine a creature with poison so toxic, skin contact can cause hours of burning pain. A creature with special adaptations to plunge weaponized mucus into its victims, delivering what could be a lethal blow to smaller foes. Now imagine this same creature spending all day sitting in a hole using it’s face as a door, avoiding predators by blending in with the dirt. Oddly, this is all true for casque-headed frogs like Greening’s frog (Corythomantis greeningi.)

Holding their hole with their head

Greening’s frog can easily qualify as dangerous, but not exactly fierce. The small native of the dry Caatinga forests in Brazil has to be very careful about managing moisture. To help with this, these frogs back into holes in the dirt or rotted trees, using their heads to seal off the entrance. Their heads are flattened and relatively stiff compared to other species of frog thanks to many parts of the skull being fused together. The finishing touch on these moisture-locking noggins is their camouflaged coloring, allowing them to sit in their holes without detection by predators.

When a frog’s face can be fatal

A predator who does take interest should be very careful with how they knock these little frog-doors. Like many tropical frogs, Greening’s frogs and their cousins, Bruno’s casque-headed frog, have poisonous mucus on their skin, produced in glands on their heads. Unlike other frogs, these two species can be a bit more proactive with these toxins thanks to small spines growing along the front of their face, near the mouth. With those spines, plus a swift headbutting motion facilitated by unusually flexible necks, these frogs can actively deliver the poison to their harasser (making them technically venomous.)

The venomous mucus is no laughing matter. Externally it can cause the aforementioned hours of pain. If ingested (or injected via headbutt,) the venom can be lethal to a small animal, and was 25 times stronger than neighboring pit vipers. Fortunately for the other inhabitants of the forest, Greening’s frogs haven’t ever been observed using their toxic barbs aggressively, instead keeping them simply as the world’s most dangerous “do not disturb” sign.

Source: This Frog Uses Its Spiky Face to Deliver a Venomous Headbutt by Ed Yong, Not Exactly Rocket Science