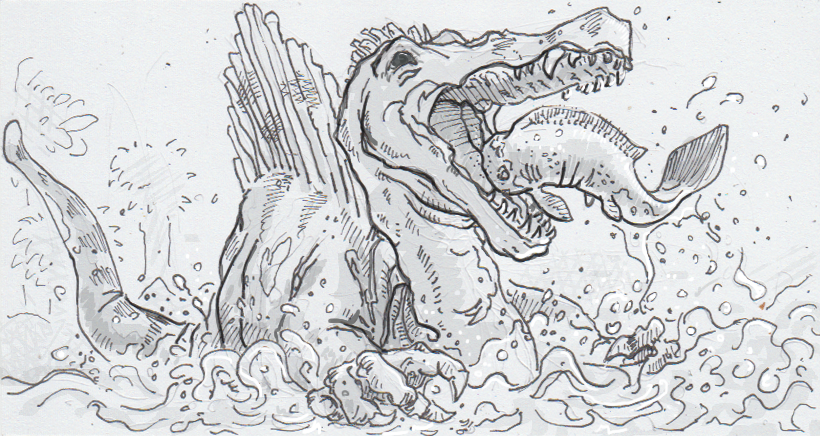 Spinosaur jaws flexed and stretched to let them swallow

Spinosaurus was apparently a giant grab bag of anatomy and behaviors. Between the large, clawed hands, finned back, crocodile mouths, it’s somehow appropriate it wasn’t immediately clear to paleontologists how the creature fit into its local ecosystem, outside of its ability to swim in the shallow waters of North Africa. More variables have been added to the mix in the form of possibly mismatched fossil samples causing confusion over the size and proportions of the Cretaceous theropod. A recent study has narrowed down a bit of Spinosaurus‘ story though, and that’s that it ate like a pelican. Of course!

Pelicans, like all modern birds, lack teeth, and thus don’t chew their food. With a diet focused on fish, this means the birds basically toss their meals back, then swallow them whole. While spinosaurs had conical teeth in a long, narrow mouth, they may have just been using them for capturing prey with a quick snap, rather than ripping or chewing them up much. They then swallowed the fish (or whatever) in one or two gulps, letting their stomachs to the mashing.

This method of feeding was uncovered when examining spinosaur mouths outside their teeth. At the front of the lower jaw, the mandibular symphysis, the point where the jaw bone comes together for the animal’s chin, had an unusual amount of ridging for soft tissue attachment. This would have allowed the front of the mouth to flex and possibly stretch to accommodate larger objects to fit inside at once. At the back of the jaw, the point of articulation was fairly loose, which would have also supported swallowing large mouthfuls in one gulp. This flexibility may have helped expand the animal’s menu, allowing it to have more options with which to feed its 40-foot-long body.

While this research on Spinosaurus‘ mouth is a bit more narrow in its focus, a dearth of reliable fossils have made them hard to study. The earliest fossils of Spinosaurus were lost in World War II, and later specimens have been collected from sites that may have contained multiple species which were later assembled into a single skeleton. This lead to some questionable proportions, although there is general agreement that spinosaurs as a group were likely decent swimmers, focused on fish in their diets, and were pretty gigantic predators. This new work then shows that their food may have been pretty gigantic as well.