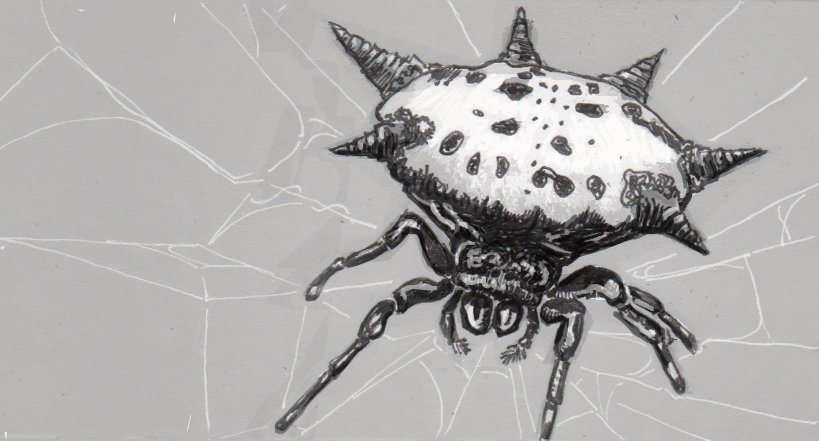 For billions of years, our world has rotated once every 24 hours, give or take. This helps distribute heat, makes photosynthesis viable in ever hemisphere, and has set the internal clocks in most animals’ bodies to operate on the same 24-hour cycle. Circadian rhythms could once be taken for granted, as the Sun was everyone’s clock, although modern artificial lighting and high-speed travel across time zones have revealed that there can be serious consequences for our brains and bodies when things are out of sync. In this context, scientists have been baffled as to why a spider, free of distracting media devices, would have evolved to be misaligned from the world around it.

When you look at a spiny orb weaver spider, you probably won’t notice how tired it must be. They’ve got a flashy exoskeleton, with black spots on a bright white abdomen, topped off with six red, conical protrusions that make it look like a cross between a Willy Wonka candy and alien. The conspicuous arachnids sit in the middle of their circular webs all day, somehow scaring off predators but not prey. Importantly, Allocyclosa bifurca and two close relatives spin a new web each morning, which was the first clue about their unusual sleep schedule.

Compensating for a fast internal clock

Detecting jet lag in a spider isn’t obvious from first glance. Researchers were studying spiny orb weaver behavior patterns when they happened to notice an odd pattern turning up in the timing of the spiders’ rest periods. Each day, they seemed to be operating on a shortened schedule, as if their internal clocks just didn’t operate on a 24 hour clock like most animals. After monitoring spider activity in total darkness to eliminate the influence of sunlight, researchers confirmed that spiny orb weavers physiology operates on 17.4 hour day, even though that basically meant they had to constantly deal with severe jet lag to catch up to the timing of the Sun.

This schedule should lead to a lot of chaos for the spiders, both physiologically and logistically. They usually become active around dusk, moving around at night and prepping their new web a few hours before dawn. They then sit motionless in their webs during the day, moving only when prey gets stuck in their webs. If allowed to operate on their natural cycle of a 17 hour day, their brains should drive them to start wiggling around when there are hours of daylight left. Possibly thanks to exposure to daylight, the spiders apparently fight this instinct, staying put in their webs until evening truly arrives.

Researchers now want to find out exactly what mechanism is letting the spiders make these daily adjustments to their schedules, and how they’re doing so without the health problems usually seen in other misaligned animals. Presumably, they’re relying on sunlight to tell their brains when the day ends, but there are still questions about how their brains handle the misalignment without signs of harm.

Source: These spiders may have the world’s fastest body clocks by Mariah Quintanilla, Science News