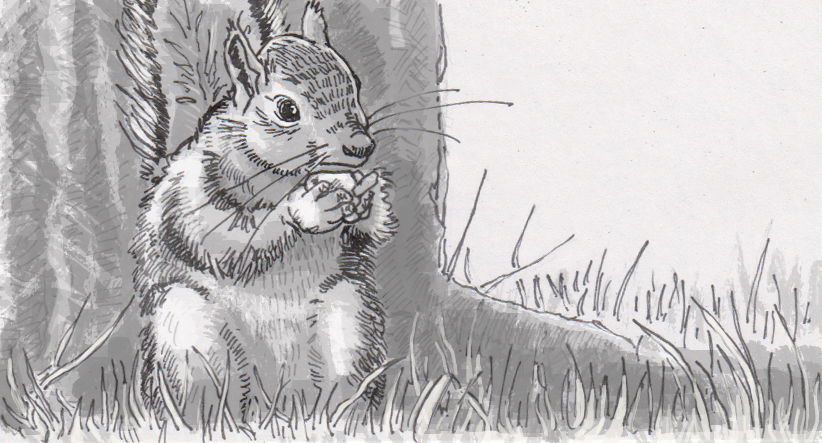 Researchers at the University of California, Berkeley have been trying to recreated the maps that their local squirrels keep in their heads. In a variety of different experiments, biologists have followed eastern fox squirrels (Sciurus niger) around the Berkeley campus, keeping track of every place the furry critters hide their nuts and seeds. The researchers aren’t after the food directly, but are hoping that by mapping out every cache in the area, they’ll be able to better understand how these scatter-hoarders decision-making and overall cognitive abilities.

When a squirrel obtains a peanut or acorn, their first task is to asses if it’s worth burying or not. They inspect it by looking it all over, sampling a bit of the husk, and then shaking their head while clutching their prize. It’s not clear what the head-shaking measures exactly, but researchers have found that more movement usually corresponds with a higher chance that that nut will be saved for later, rather than eaten on the spot. For the nuts that pass this test, the squirrels will scurry off to bury them someplace safe. Some nuts are lost, but the squirrels generally remember exactly where they hid their stored food, even taking the time to organize it when possible.

In one experiment, researchers offered nuts to squirrels to see if the way food is acquired influences what the squirrels do with it. Each squirrel had a ration of 16 nuts of varying types, but some squirrels were given them randomly, while others received them according to type, such as four almonds followed by four peanuts. The squirrels did seem to value organization, but not on the researcher’s part. Regardless of how the nuts were received, the squirrels would move back and forth to four distinct caches, sorting their food like you sort your groceries. Researches assume that, like your cupboards or refrigerator, this sorting allows the squirrels to find the precise type of food they want faster, since all the almonds will be in one place, and the peanuts all in another. It seems to be a balance between efficiency while avoiding leaving all their winter food stores vulnerable in one location.

The squirrels have shown one other limitation, which is that they generally try to stay within 330 feet of where the food was found when they hide it. So when a researcher offered nuts from one location, the squirrels could pick their own locations to organize things. When researchers were handing nuts out from multiple locations, the squirrels instead focused on diversifying their hiding places. Instead of taking the time to sort by type, the squirrels seemed to simplify their strategy, focusing more on finding novel hiding places for each item.

It may be tempting to write this off as a cap on the squirrels’ cognitive abilities. Maybe adding new locations to pick up nuts was too mentally taxing to make the effort to organize them at the same time. However, it could be that they were making other mental anchors to remember new hiding places, and organization wasn’t as necessary to keep track of things. Researchers at Berkeley have already found that these squirrels are persistent problem solvers, spending plenty of time and energy to figure out locked puzzle boxes, so it seems unlikely that sorting their snacks is necessarily too demanding a task.