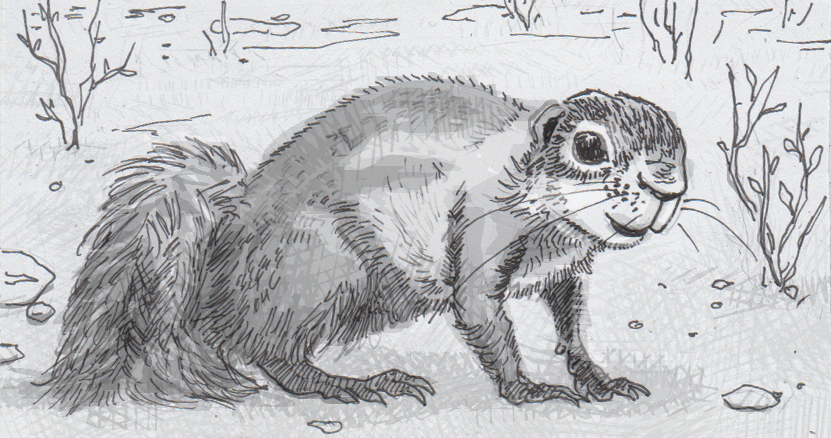 Squirrels rely on the Sun when searching for their secret stashes

If you’ve ever forgotten where you parked your car, a technique used by squirrels to locate hidden items may be just the trick you need. The clever critters living in southern Africa need to make the most of their limited food supplies, which often means hiding tiny surpluses for later use under rocks or shrubs. There aren’t a lot of major landmark, much less handy signage reading “ROW B,” and yet these ground squirrels are able to return to their caches quite easily. The catch is that their technique seems to only allows them to find their hidden treasures once every 12 hours or so.

The Cape ground squirrels (Xerus inauris) were found to be making mental maps based on the position of the Sun. When it was time to hide a morsel, they would often run in a straight line either towards or away from the Sun until they came to a bit of terrain that could hide the food. Automatic cameras filmed the squirrels returning to these stashes, usually 24 hours later when the Sun would be at the same point in the sky and providing a consistent reference point for navigation.

There was some flexibility to this strategy, which the squirrels seemed to employ when they felt possible rivals might discover their food. Rather wait out a full 24-hour cycle and risk their food’s discovery by their peers, the squirrels could opt to retrieve their food early. In those cases, they would wait until the Sun was in a mirrored position in the sky, such 11:00 am after hiding food at 1:00 pm (at least during the summer.)

If this seems like a slightly frustrating system, you might be able to just glance at the squirrels’ tails to see how they like it. A separate study from the University of California, Berkeley, squirrels were found to express their mental state through body language, and tail movement in particular. Right before acquiring a walnut treat, the squirrels would do a quick little shuffle with their rear legs, which may look like anticipation but is more likely to assert ownership of that found food. When things go wrong, like when food can’t be accessed as expected, the squirrels usually start twitching their tails in an s-shaped movement, which also corresponds with how they react to a potential threats.

So the next time you’re having a hard time locating something, make sure you’re searching at an appropriate time of day to really line up your cues as much as possible. And if things don’t work out, make sure to give the world a good wiggle to let us know what’s going on.

Source: Ground squirrels use the sun to hide food, Phys.org