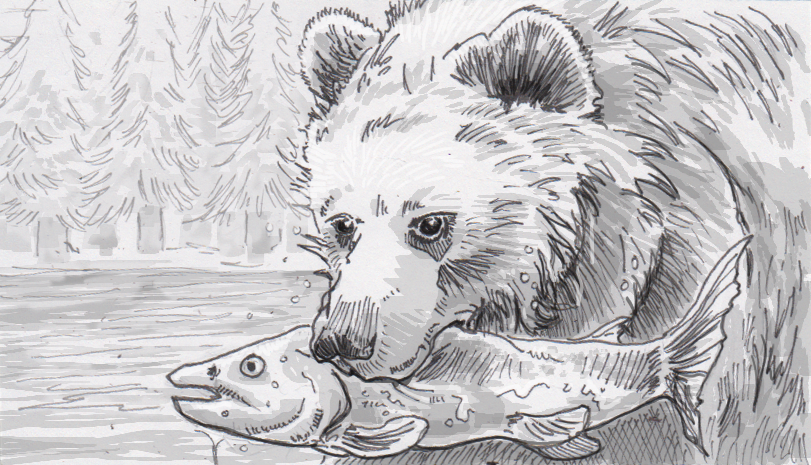 To stay efficient, bear diets shift throughout spring and summer

Scientists are using a variety of approaches to confirm that bears are not, in fact, living off of stolen picnic baskets. Using techniques that range from stalking to chemical hair analysis, we’re learning that bears are actually conscientious eaters, shifting their diets with the season to target foods that aren’t too sugary or too fibrous. Instead, they seem to be looking for food that has just the right amount of protein and fat to make sure they’re all set for the next winter’s hibernation.

In Japan, researchers followed some Asiatic black bears (Ursus thibetanus) for months at a time, documenting their every move to see what was on the menu. With telephoto lenses, will and endurance, they were able to make a record of what the bears ate at different points of the spring and summer over two years. What they found is that the bears were very good at targeting foods that offered protein to build muscle, while avoiding things that might be too rich in fiber, which is less efficient to digest. For example, in early spring the bears would eat budding leaves, but move onto things like ants once the plants had grown out further. In some cases, maximizing protein even seemed to trump over all calories, possibly just as a way to be as efficient with digestion as possible.

In British Columbia, grizzly bear (Ursus arctos) diets were examined in a much less direct method, but similar trends were found. Rather than observe the bears directly, researchers looked at trace evidence of the bears diets for signs of what was being digested. This kind of research often utilizes feces for evidence, but with concern that feces may over-represent fibrous items that are hard to digest, scientists from the Canadian Natural Resource Science Section sampled bears’ hair. By looking at the chemical isotopes that turned up in hair found on trees and bushes, the team was able to figure out what foods had been digested and then grown into the animals’ fur (and presumably muscles, bones, etc.)

Similar to the Japanese study, these bears seemed intent to eat very efficiently. Plants were a bigger part of the diet than expected, with a focus again on protein sources. When the bears had apparently eaten enough plant-based protein, they started in on salmon as a source of fat. It’s easier for a body to build fat from another animal’s fat, so the bears selectively ate the fattiest parts of the fish, like the skin, roe and brains. The desire for fat was so specific that the rest of the fish were often discarded along the river, even if they could have offered other forms of nutrition.

Finally, looking at fur also revealed that the grizzly bears started growing their winter coats later in the summer than previously understood. As with the findings on bears’ diets, this information should help people understand and plan around bears’ feeding schedules and movement. Ideally, this would make it easier for the bears to meet their needs without running into too many complications with humans along the way.