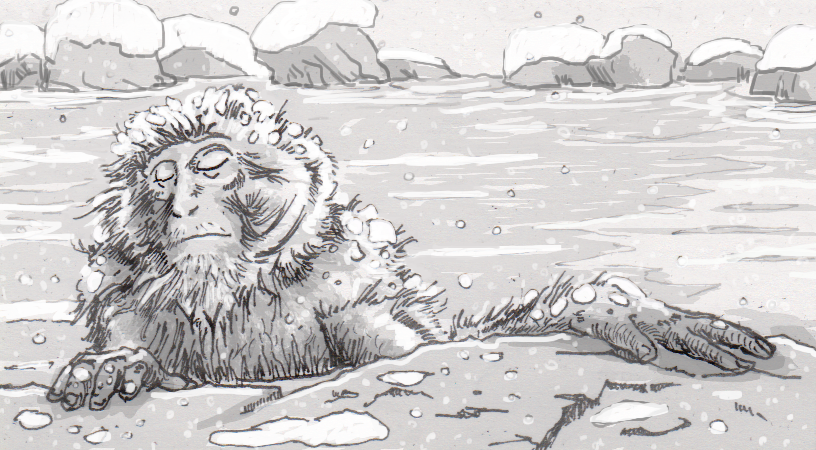 Humans have enjoyed bathing in Japanese hot springs, or onsen, since at least 712 AD. The other local primates, macaque monkeys (Macaca fuscata), took a bit longer to catch on, waiting until 1963 to take a dip in the geothermally warmed waters. That first female apparently told her friends though, because the hotel where she took her bath was shortly swarmed with other bathing macaques. Rather than potty train every furry guest, certain springs were designated as exclusive to the macaques, eventually leading the founding of the Jigokudani Monkey Park in Nagano. The hot springs have only grown in popularity since that first bath, but researchers have only recently been able to confirm why the monkeys have adopted this unusual behavior.

To a human bather, the motivation for the bathing monkeys may seem obvious. Judging by the somewhat serene looks on the macaques’ faces, it’s safe to assume that they enjoy their visits to the onsen for the same reasons we do- the warm water is relaxing and pleasant. The fact that the monkeys are more likely to use the hot springs in the winter further supports the idea that they’re just interested in warming up when the weather gets cold. However, only one-third of the female monkeys living in the park seem to bathe, suggesting that this behavior may have a bit more nuance to it than a desire for hot water.

While the macaques are now adept at mimicking human bathing in the onsen, they’re not about to answer questions about their motivations. So researchers looked to their lack of hygiene for answers, testing the poop of various individuals for levels of stress hormones like faecal glucocorticoid (fGC). As expected, the warm water helped the monkeys maintain their body temperature, lowering stress levels. Less obviously, dominant females were found to demand more access to the warm pools, but also raise their stress levels more in various conflicts with other monkeys. So every bather benefited, but dominant females felt more of a swing between their stressed and relaxed moments.

So it’s not a huge surprise that our fellow primates enjoy a warm bath in cold weather, but it’s important for wildlife managers to understand. These monkeys have not only adopted behavior modeled by humans, but they’ve also grown accustomed to being fed barley over the winters in the park, partially to keep them in the area for the pleasure of tourists. These are some significant changes in behaviors, which may prove to have implications in the macaques’ health and reproduction. At this point, only 50 or so monkeys are actually bathing on a regular basis, but it’s worth understanding what that means to the macaques if humans are actively protecting this change in their ecology.