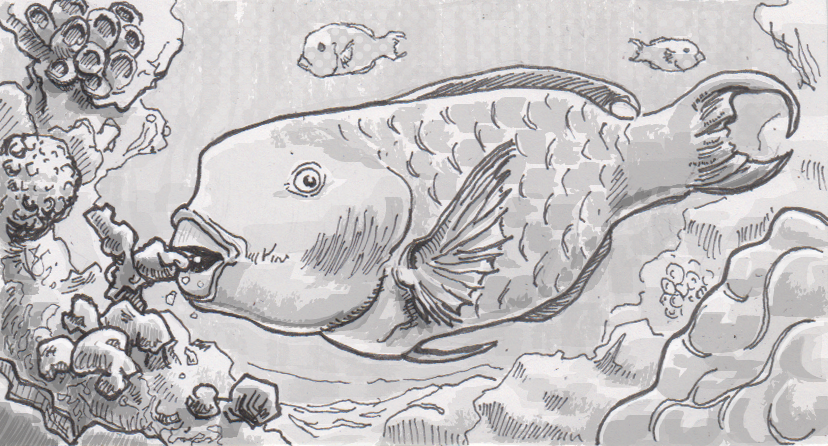 One of the functions of predators in an ecosystem is to keep herbivores from eating themselves out of house and home. For example, the reintroduction of wolves to Yellowstone National Park in 1995 has helped a variety of species, including the elk the wolves prey on, as they no longer over-forage on stands of willow trees. Not every creature needs to be policed by a predator though, as scientists tracking steephead parrotfish have found that the herbivores do a good job of regulating themselves. Even without fear of being eaten by larger hunters, these fish are keeping themselves fed and promoting balance in their ecosystem at the same time.

Steephead parrotfish (Chlorurus microrhinos) living near the Palmyra atoll love eating the thick algae that grows in the area. This appreciation seems to extend learning the algae’s life cycle, as the fish will feed on patches of the thick sheets of plant life for a period of time, but move on before completely wiping it out. They then feed on a different patch of algae, moving when that area is thinned out. The parrotfish will continue this cycle, only feeding on their first plot of algae once it’s had sufficient time to recover. They seem to realize that if handled properly, the algae are a renewable resource that’s worth preserving, and protecting.

Parrotfish wouldn’t move on too far from a patch of algae after eating, because they also wanted to guard it from their peers. Big hunks of turf algae would especially attract the efforts of large, male fish in particular. The fish would chase away potential rivals, ensuring their plot of algae-covered coral would be ready to eat when they were ready. In contrast, smaller male and female fish were seen more often in areas where the algae coverage was a bit more dispersed, and presumably harder to stake out as a single location.

These carefully tended patches of algae matter to more than just the hungry and jealous parrotfish. Algae growing on coral can be harmful, to the point of being lethal to coral larvae. By scraping the algae off rocks and coral, the parrotfish give the surrounding ecosystem a boost. Larval coral in particular have been found to take advantage of the freshly scraped areas to get a foothold, hopefully becoming robust enough to survive the eventual return of the algae. Since coral supports so many forms of life, this constant, if rough, pruning of algae growth is regarded as a net win for reef ecosystems.