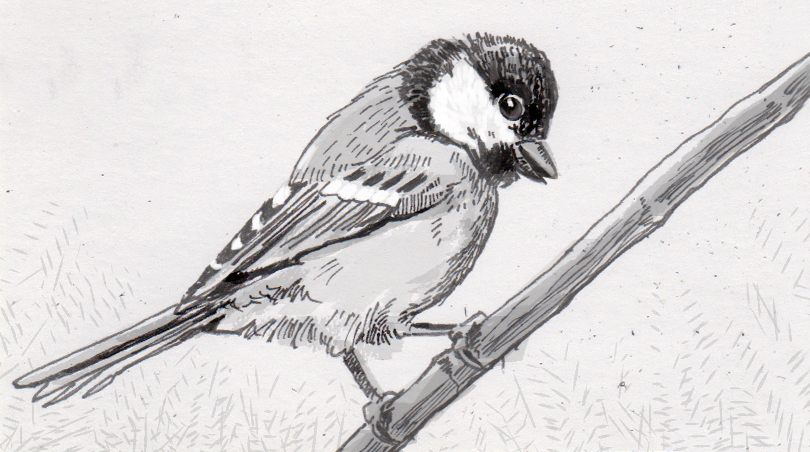 We’re still a long way off from being able to converse with a songbird like a Japanese tit (Parus minor), but after a lot of careful listening, we can at least tell when they’re tweeting about snakes. Like many birds, Japanese tits will shout out specific alarm calls when a threat is detected, helping to warn their kin in the area. This sort of punctuated vocalization has been found to be specific to the type of threat detected, allowing researchers to match specific sounds to specific concerns. Once the utility of these chirps was understood, it raised a new question- what does this chirp look like in the bird’s brain?

Ethologist Toshitaka Suzuki suspected that the tits processed a call about a snake in a similar way to humans. We know the chirp to warn about a snake is relatively specific, making it comparable to a single word in languages spoken by humans. When presented with a word like “snake,” most humans (but not all) will automatically visualize a rough approximation of the object being discussed. We might not necessarily picture a specific species of snake, but a serpentine form is likely to pop into our imagination. Suzuki’s hypothesis was that Japanese tits did the very same thing, although asking them to describe their thought process was still beyond his abilities as a bird translator.

Birds’ view of a snake-like stick

To work around the language barrier, Suzuki set up an experiment that let the birds demonstrate what was on their minds. A crude snake “puppet” was made from a stick, then hung vertically along a tree. Strings attached to the stick could make it wiggle back and forth, looking a bit like a slithering serpent if you were feeling generous. However, the lack of realism was key to the experiment- the goal was that the stick would only remind a bird of a snake if they were already picturing a snake in their heads.

The actual test came when birds could see the wiggling stick while listening to recordings of various Japanese tit calls. Non-specific alarm calls naturally caught the bird’s attention, but didn’t make them pay any special attention to the stick-puppet nearby. The alarm call for “snake,” however, did make the birds look twice at the vaguely snake-like object nearby, suggesting that the call for snakes made the birds immediately cue into visual stimuli related to snakes. To do this, the birds most likely had to associate the meaning of the alarm call with a visual representation of snakes, suggesting a very similar thought process to what is found in humans.

That last bit may not seem significant at first. If birds have chirps that operate as words, why shouldn’t they associate words with imagery too? Considering that bird brains don’t have the same functional structures as mammals, lacking the cerebral cortex we use for a lot of abstract thought, a better question may be why bird language operates like ours all. Why should they have evolved to solve these problems so similarly to humans? One explanation is that these patterns may be more widespread than we currently know. However, without clear bits of language to test against in other species, it may be hard to see if these underlying mechanics evolved long ago, or if humans and birds have simply converged on this solution to sharing, and picturing, our ideas.