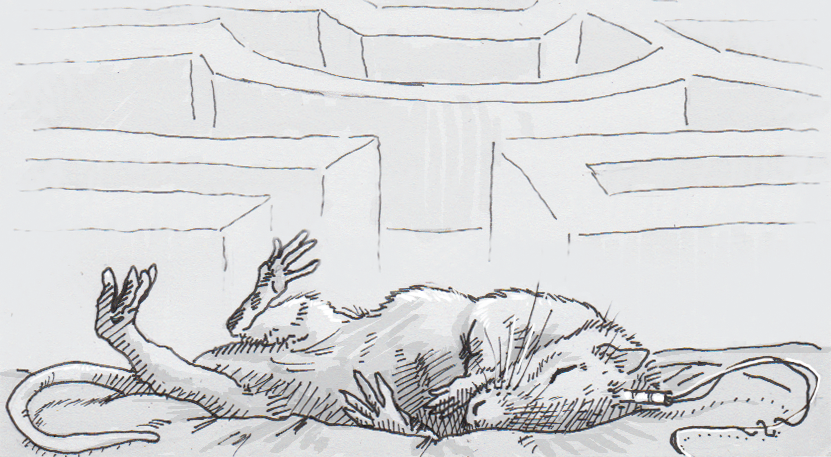 You know that dream, where you’re walking down a hallway, and suddenly there’s an intersection, and you turn left and then there’s this pile of food just waiting for you? No? Well, maybe if you were a lab rat this would seem more familiar. Rats have been found to not only to replay experiences they’ve had while they sleep, but also to imagine aspirational changes in those memories.

Researchers have been tapping into rodents’ thoughts for a while now, and have a decent working model for where to look for different kinds of thought processes when they’re plugging electronic sensors into rat brains. They know that when the rat experiences a new location, certain parts of their brain are activated as they map out that space. It’s specific enough that when the rat is sleeping later, they can confirm what location the rat is remembering as it rests. The next question was if the rats could conceptualize a space they had observed but not actually experienced.

Confirming the accuracy of rats’ dreams

The rats where tested by being put in a simple, T-shaped maze. At the intersection, food was visible down one path, but it wasn’t accessible. Later, when the rats brains were going over these memories, their internal mental maps seemed to extend the experience, as if the rat was imagining moving past the barriers, into the space with the food that they had not been able to visit that day. The next day, the rats were allowed to revisit the maze without the barriers, and the mental map that had been plotted the night before matched their eventual experience in the maze.

The rats put a lot of mental energy into this task while they slept, although at first blush it’s not clear that there were any immediate benefits to it (ie, they weren’t clearly faster in the maze the next day). Further tests will look into how this mental energy pays off, but for now it’s interesting just to confirm that rats would have a dream like this in the first place. It may mean that some of our dreams’ importance during sleep is not just to reencode memories, but to actually try to do a bit of abstract problem-solving before reengaging with the task later.

Source: Rats Dream About the Places They Want to Explore by Kiona Smith-Strickland, D-Brief