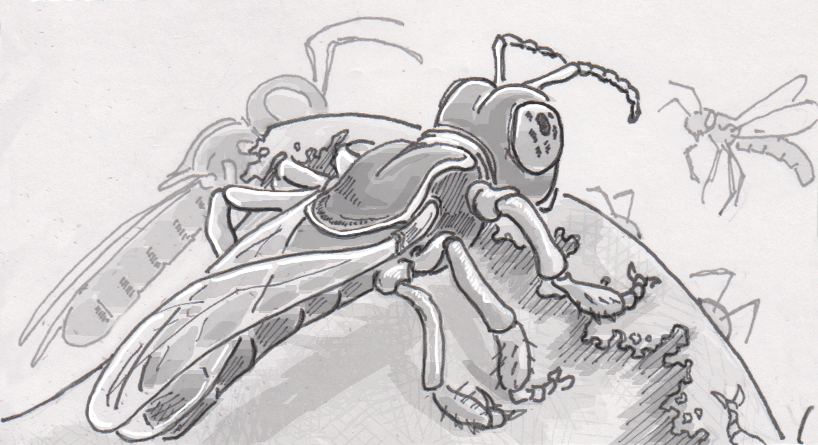 One of the many things I’ve learned from cartoons is that if you try to steal honey from a beehive, the bees will swarm and chase you until you hide in a nearby pond. The threat of a barrage of bee stings is pretty motivating, even for a cartoon character, but of course this system doesn’t hold up in real live too well. For at least 500 species of stingless bees, a venom-filled poke isn’t even an option, leaving evolution to come up with another way to defend their hives: bee bouncers.

Stingless bee species like the Brazilian Tetragonisca angustula have been found to have developed a sort of third caste of bee not normally seen among wider bee populations. In addition to queens and drones, T. angustula bees can grow up to be guards. The guard bees grow to be around 30 percent larger than their nectar-collecting kin, and in related species even have slightly different coloration on their bodies. Importantly, they don’t leave the hive to gather supplies for food. Instead, they hang out at the hive’s entrance all day, ready to brawl with thieves that might arrive to steal their honey.

Now, 30 percent larger than a bee isn’t going to be especially intimidating to a bear, even in a cartoon, but that’s fine because these guards are really looking out for other bees. The most likely thieves are species of robber bees, who live up to their names by only gathering honey from their pollinating brethren. For instance, all the species in the genus Lestrimelitta skip visiting flowers altogether, relying only on cleptobiosis, or the stealing of food from other animals. This kind of parasitic honey-gathering can pose a serious threat to other bees, and phylogenetic analysis of other stingless bees found that robber bees have pushed the evolution of larger guard bees at least five separate times in the last 20 million years.

From robbers to all-out raiders

The clashes between pollen-gathering Tetragonisca and honey-stealing Lestrimelitta bees have been developing over enough time for special guards to develop in threatened hives, but sometimes honey robbery can blindside a hive before defenses can be mounted. When food supplies are stressed, usually in late summer as flowers are less abundant, any normal Apis honeybee can apparently be pushed into a life of crime. Bees in search of food smell a hive’s honey, at which point they start by infiltrating in small numbers to grab as much honey as they can. They bring more of their own colony members, and may eventually swarm a target hive in such high numbers that they can wipe their rivals out entirely. Honeybees will try to defend things as best they can, but short of fortifying a hive’s entrance, even humans have a hard time stopping a swarm of looting bees once they get started.