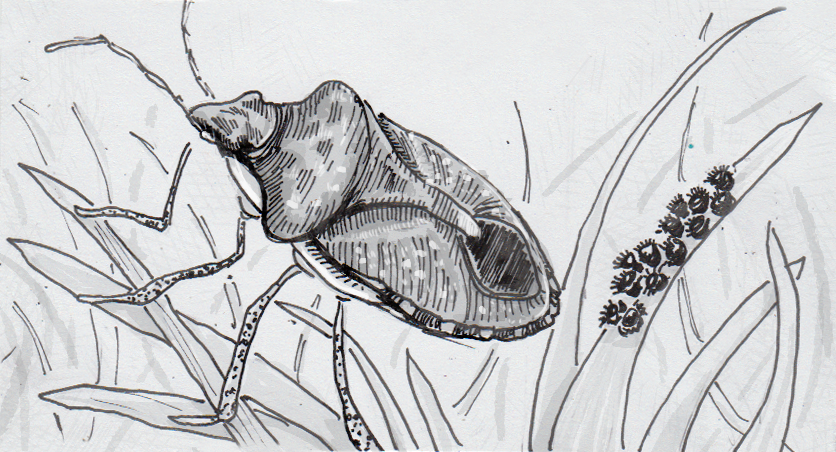 Stinkbugs set eggs’ shade to best shield them from the sun

While studying parasitic wasps, a graduate student at the University of Montreal stumbled upon some amazing abilities of the spined soldier stink bug (Podisus maculiventris). The stink bugs were being raised as fodder for the lab’s primary line of research with wasps, but Paul Abram happened to notice an important detail about some of the eggs in their enclosure- they were varying shades of gray, matching the surfaces they sat on. This wasn’t because the eggs were translucent, or somehow leeching pigment from materials around them. The mother stink bugs were somehow selecting the color of her eggs, something never seen before in any animal.

The benefits of colored eggs

Egg coloration can serve a few different purposes. Some egg colors serve to hide the nest from predators. Others help the parents identify their own eggs against would-be impostors. Those recipes aren’t whipped up like Easter egg dye though— they’re borne from genetics, with small variations cropping up thanks to the mother’s diet or age. Testing on various surfaces revealed that the mother stink bugs, on the other hand, were able react to the visual stimuli around her when laying the eggs, coloring them accordingly.

Interestingly, the stink bug eggs weren’t being colored to achieve either of the goals mentioned above. The dark or light pigmentation seems to actually be in place to protect the developing larvae from ultraviolet (UV) light. The mother stinkbug seemed to take stock of the ratio of UV light compared to the light reflected off of the available surface. So when laying eggs in an exposed place, like the top of leaf, the eggs are dark. Eggs laid under a leaf are left white, as the leaf provides sufficient sunblock without the need for further pigmentation.

A new take on melanin

Once this need for sunscreen was established, it was assumed that the mother must be manipulating melanin levels in the eggs, as that is the pigment most vertebrates use for coloration and UV protection, including human skin. Instead, the stink bugs had one more surprise in store, as the pigment in the eggs not actually melanin. It functioned in a similar way though, indicating that it’s likely a case of convergent evolution, wherein structures evolved discretely while arriving at similar solutions to an environmental pressure. It’s hard to say how common this pigment may be yet, since before the stinkbug eggs, nobody knew to look for it.