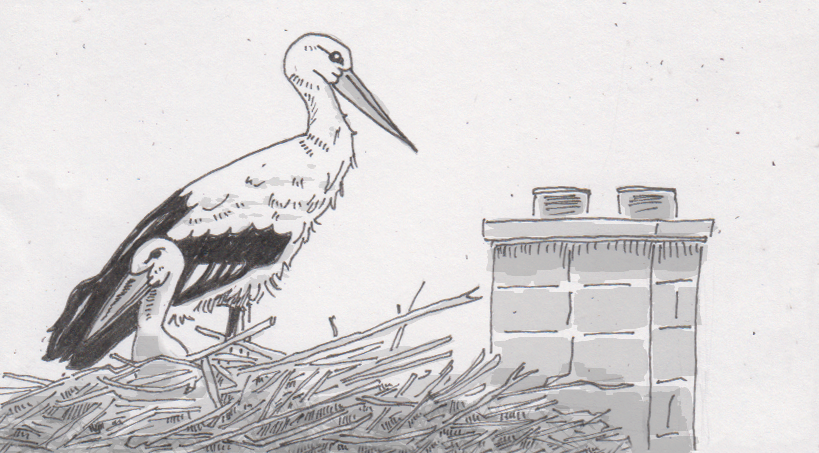 In The Storks, Hans Christian Andersen told a story about large birds delivering human babies in Germany. The large birds flew into towns carrying babies to families, dropping them down the chimney like a gift. Popular culture has helped preserve this myth, but if you can step back from the familiarity of the story, it’s a very weird concept to explain the birth of new humans, especially since humans aren’t terribly secretive about gestation. As it turns out, the idea of the stork making people into parents wasn’t exactly a random, desperate attempt to avoid explaining sexual reproduction to children. The stork has long been associated as a good omen in many cultures, and so storks bringing babies was more of a ‘natural’ fit than we might appreciate.

Roosting on roofs and picking babies from bogs

One of the most important part of storks’ association with babies and parenthood was how familiar they were to people. With a wingspan that can be as much as seven feet across, storks aren’t especially fearful of humans, and were known to build their nests on rooftops in across Europe. Most cultures celebrated this, and considered a stork on the roof to be an omen of either good luck in general, or more specifically surrounding the household’s fertility. By nesting near people, storks were familiar enough to weave into a story. However, they are migratory birds, and were often gone for around nine months out of the year. This had the obvious tie-in to human gestation, but also helped add a bit of mystery to the birds, versus the mundane and often annoying reputation of pigeons.

It was thought that storks would fly to some mysterious land where they could pick up infants to bring back to their future mothers and fathers. When nosy kids asked where exactly the storks were coming up with babies, the answer was apparently the forests and woods of Europe. Babies souls were said to live in everything from ponds to trees to caves, and storks were going to retrieve them for deserving parents. A twist was that babies were born from “stork stones” which would either hatch to reveal a child, or should be thrown over a person’s shoulder to indicate their desire for a new baby to be delivered.

Beyond bundles of joy

Outside of this German fairy tale, storks have held symbolic or mythological significance around the world. The ancient Egyptians used storks to represent a person’s ba, or inner personality or soul. Many other cultures used them as a symbol of fidelity and commitment, erroneously believing that they mated for life (although they will often return to the same nest with the same mate, they’re not truly monogamous.) Still, these associations have obviously been eclipsed by the stories of bird-based family planning, and maternal storks have been added to everything from accounts of Jesus’ birth to pickle jars trying to cash-in on pregnant women’s food cravings. Sadly, one case where there isn’t a connection is in the English language— the idea of ‘delivering’ a baby predates these stork stories, being tied to Latin terms for freeing or liberating something.

Source: Why Storks are Associated with Delivering Babies by Emily Upton, Today I Found Out