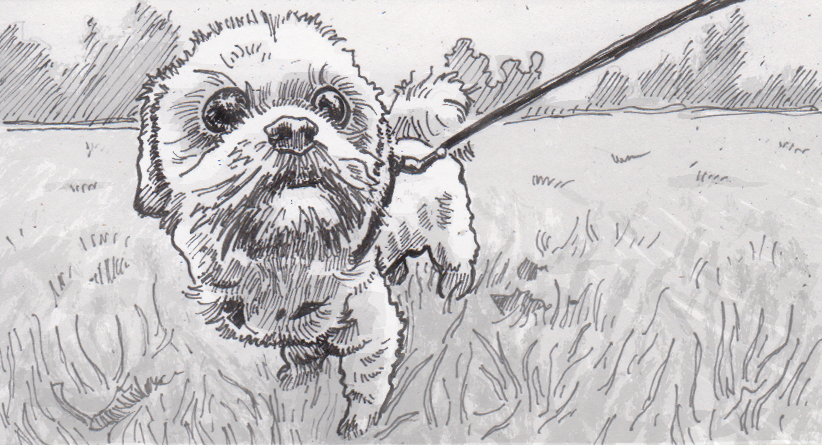 Studies confirm the importance of eye-contact between dogs and humans

My family is currently taking care of a small dog that seems to be a cross between a Lhasa Apso and a miniature Ewok. The tiny creature’s head seems slightly oversized, if only to hold his enormous and admittedly adorable eyes. Unlike many other animals with proportionally large eyes, this dog doesn’t seem to have any particular affinity for navigating in the dark. Instead, recent studies suggest that dog eyes, and especially eyebrows, have likely been shaped by a need to communicate and bond with the humans that care for them.

Even with smaller peepers, dogs can get our attention when they raise their eyebrows, calling attention to their eyes. We’re likely to look at these expressions and see signs of longing, interest or just cuteness, but those interpretations are all in the, ahem, eye of the beholder. To really be sure dogs were being expressive, and not just excited, researchers tracked their facial movements in a variety of scenarios, trying to objectively document what circumstances made a pooch adopt so-called “puppy-dug eyes.”

Using facial tracking technology originally designed to track human faces, researchers were able to closely measure small changes in the expressions on dogs’ faces. To see if raised brows were simply a sign of excited interest, dogs were shown stimuli that didn’t involve humans, like food. The dogs reacted to food, but not as much as when a human was present. Furthermore, the dogs’ were found to be most expressive when they knew their human partners were looking at them. Altogether, researchers feel that this proves that dogs use their faces to help communicate with us, not just as involuntary twitching when their heart rate goes up.

Looking through the lens of hormones

Dogs may want us to notice their raised eyebrows and purposeful gaze, but they’re studying our expressions too. A separate study tracked dogs’ eye movement as they looked at photos of human faces. Under the assumption that more time looking at an image correlates with more interest, researchers found that dogs were more interested in watching an angry looking human than a smiling one.

To see if the smiles were being appreciated or simply ignored against an image of a potentially threatening human, the dogs were given a dose of the hormone oxytocin. Oxytocin is commonly associated with social bonding, such as when a mother holds her nursing baby. In the dogs, the oxytocin caused a similar effect, making them more interested in the images of smiling humans than threatening ones.

Both studies show how much dogs have been shaped by their relationships with humans for the last 30,000 years. As humans domesticated dogs, we apparently selected for animals that respond to and trigger some of the social and emotional mechanisms humans use with each other, from “cute” faces to hormones. It would seem that the dogs are now active participants in this dynamic, suggesting that further research is needed to see just how sophisticated this inter-species communication has become.

Source: Dogs are more expressive when someone is looking, Phys.org