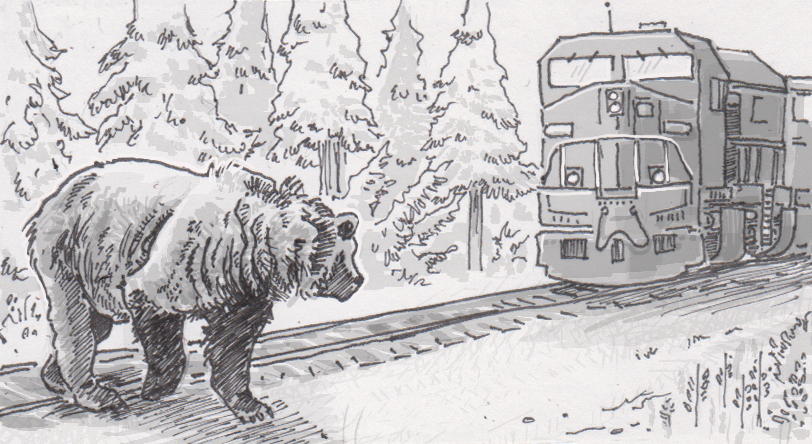 Study seeks railroad safety measures for the benefit of bears

Every evening, rush hour near my house is marked by an increase in train whistles. The tracks are around a mile away, but the whistles of the various commuter trains are clearly audible from our porch, or even through an open window. The sounds are all much louder up close of course, with express trains ripping by fast enough to raise your heart rate. All of these unmistakable toots and rumbles are heard to ignore, much less miss, which has been raising a lot of questions about safety in Canada. A growing number of grizzlies were being killed by trains that travel through the forest, leaving investigators wondering how the bears were being caught off guard by something as obvious as a freight train?

With support from the public and funding from the rail companies, a multi-faceted study was launched to figure out why grizzly bears were ending up in harms way like this. The local population was estimated to be a mere 60 animals, and so the deaths of 17 bears in as many years was cause for alarm. Bears were tracked with GPS collars, food sources were examined, cameras posted near train tracks and more. In the course of all these investigations, it’s become clear that there may not be a single fix to this problem, as it’s probably a case of multiple factors adding up to a bigger problem. In fact, not all the bears were even found to frequent the train tracks in the target area of Banff National Park, although the bears that did hang out by the tracks did so on a regular basis.

What attracts bears to train tracks?

Some of the issues putting bears near the tracks probably can’t be changed. Expanded highways nearby were built with wildlife underpasses, which has cut down on the amount of roadkill for bears to scavenge. This means the bears are less attracted to the road, and instead are poking around the trains for other sources of food. This kind of infrastructure isn’t going to be dismantled, but fortunately some of the other contributing factors will be easier to address.

To figure out why the bears were interested in the railroad tracks, researchers started looking at their poop for clues about their diets. They expected to find an increase in isotopes from animal proteins, indicating that the bears were now scavenging deer or elk that had been hit by the trains. Instead they found a higher amount of grain in the bears’ poo, showing that the trains were accidentally giving the bears a reason to stay close by. It’s estimated that around 121 tons of grain are spilled off trains across Canada each year, and so taking steps to keep that cargo on board would remove a significant incentive for grizzlies and other wildlife to risk standing near the train tracks.

The tracks themselves are also going to be improved. After literally walking the tracks, researchers realized that certain sections are simply more dangerous than others. For instance, a location that saw the death of over seven bears was particularly lethal because of the S-shaped curve of track that passes beneath a bridge. At that location, the sound of the train whistles are much harder to hear, giving little warning to any animal on the tracks. Additionally, steep slopes alongside the adjacent straightaway give the grizzlies no clear route for escape. To try to mitigate danger posed by these sorts of locations, inexpensive devices that can broadcast whistles ahead of the train may be installed to buy bears more time. Additionally, safer paths are being built up to give bears a way out when trains are approaching.

Hopefully the combination of all these measures will help make train tracks less attractive and less dangerous to the bears. One test case park officials are keeping an eye on is the park’s largest male bear, The Boss. The Boss has been hit by a train in the past, but survived to scavenge the tracks another day. It’s hoped that he’s learned his lesson, but hopefully a lack of yummy grains will mean he won’t need to test out the new escape routes any time soon.

My four-year-old said: Freight trains sound like this! Toooot! Chu-chukh-ch-chuck-ch-chukh…

Source: Why are grizzlies dying on Canada’s railway tracks? by Colette Derworiz, Science