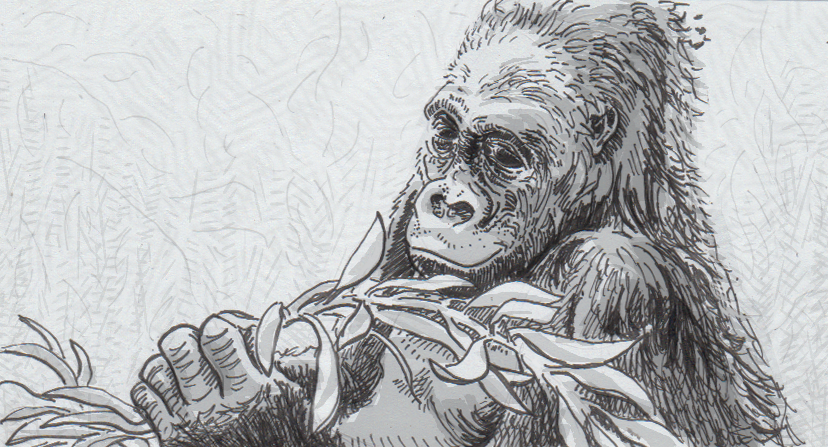 While most of us try not to talk while we eat, it’s pretty permissible to hum a “yum” of satisfaction when biting into something tasty. We’re not alone in making such sounds, as primates like chimpanzees and various birds are known to vocalize to differing degrees while eating, although the motivations for such sounds aren’t always perfectly clear. A study of wild gorillas recently looked at their dinner conversation, and found that they made two types of sounds. While this was interesting, just who did the signing may be the key to understanding their purpose.

Gorillas in zoos had anecdotal been reported to hum and sing at meal time, which helped spark interest in these animals dining habits. Some of the sounds were low continuous hums, described as having a sense of satisfaction to them. Other sounds were more like songs, or at least a series of notes of varying pitch and timing. Zookeepers have noticed that the songs change day to day, apparently the result of some daily improvisation, while still bearing the mark of their performer. In addition to recognizable voices, each gorilla is also likely to sing louder when eating their favorite food.

Songs of solidarity and security

Dinner isn’t quite so noisy in the wild though, which is an important clue in figuring out the origins of these mealtime performances. Rather than each individual joining into the chorus, singing was found to be primarily the responsibility of a groups silverback male. In this context, it seems that the songs are that male’s way to communicate that dinnertime is continuing, or that it’s time to wrap it up and move on. Females and young gorillas will occasionally vocalize, but generally they’re listening to the cues provided by the singing silverback.

The songs’ utility makes a lot of sense in the context of gorilla social structures. The silverback male is tasked with protecting and controlling the females and young in his group, and so if the songs are a way to communicate that it is currently time for everyone to eat, it fits that such decisions fall on his shoulders. Other primates, like chimpanzees, don’t have such hierarchies in their social groups, and so any member is free to eat and sing as they choose. They’re likely still communicating, but it in that case they may be crowd-sourcing the choices about mealtime instead of listening for the tunes of a single authority.