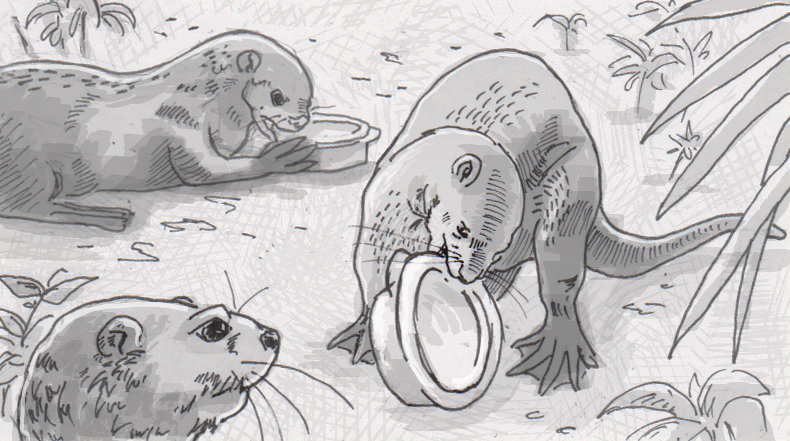 Your parents have probably taught you a lot about navigating the world, but did they ever take the time to guide you through opening Tupperware? Some smooth-coated otters in British zoos have been lucky enough to have this learning opportunity, thanks to researchers testing their problem-solving skills. Containers with bits of peanuts, fish heads or frozen shrimp were given to groups of otters to see how quickly the hungry critters could get at their treats. While every otter was dedicated, the fastest individuals were those that watched their elders’ efforts before opening their own snacks.

Smooth-coated otters (Lutrogale perspicillata) live in social groups, and regularly cooperate and coordinate with each other when hunting and foraging. To hunt fish, groups of otters will swim in a V-shaped formation, herding fish to make them easier to catch. Fishermen in southeast Asia even rely on this cooperation, and will train otters to help chase fish into nets. The 15-pound mammals will also help guard their groups, making alarm calls to warn peers of nearby predators.

Otters in the zoos weren’t seen explicitly teaming-up to pry open their puzzling food containers, but they did still rely on each other to solve the task. Younger otters especially would mimic the efforts of older individuals, applying the lessons of their parents’ to their own work. This strategy worked well, opening the food containers up to six-times faster than their undoubtedly proud parents.

This was in contrast to similar experiments done with Asian short-clawed otters (Aonyx cinerea). Researchers were surprised to see that those otters showed no signs of social learning while opening their Tupperware, with each otter having to solve the task on their own. It’s likely that this is due a difference in the Asian short-clawed otters’ foraging methods, which focus on slow creatures like shellfish that can be attained without help from a group. Without any pressure to team up, this species apparently never developed an interest in studying each other’s activity.

Aside from the demonstrating the charm of seeing otters learning to open puzzles, this research can help with otter conservation. Knowing that some species, but not all, learn from their peers provides an opportunity to better prepare captive otters for release into the wild. It might not help an Asian short-clawed otter, but smooth-coated otters that are allowed to see demonstrations of foraging or predator-avoidance in specific areas will likely have an easier time when they have to solve those problems themselves.

Source: Otters learn by copying each other, Phys.org