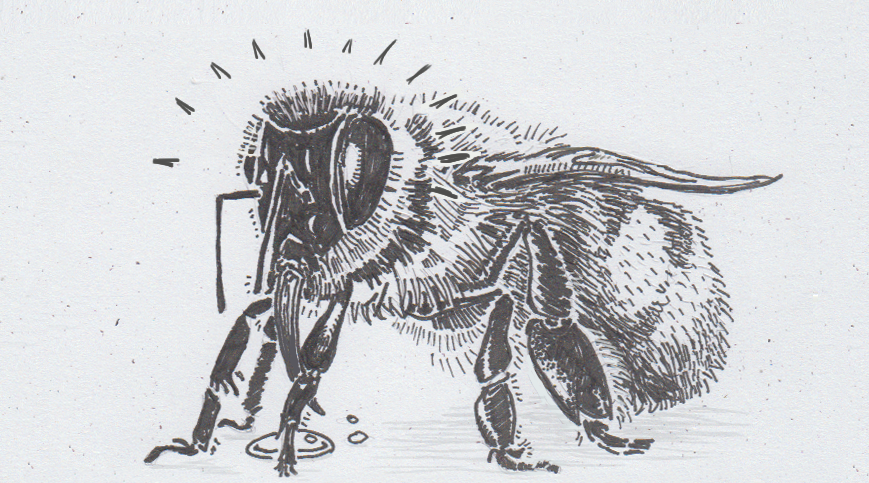 After a rough day of being attacked by mechanical spider-simulators, or shaken in a fake badger attack, nothing picks a bee up like a nice sip of sugar water. The idea that a dose of sugar improves one’s mood might not be surprising, especially kids in elementary school who sometimes seem to plan their lives around acquiring deserts, but it’s not something that scientists say easily. Since bees can’t directly communicate how a sugary treat makes them feel, researchers have been working for years to see if their bug-sized brains can even have emotional responses, and if so, what those responses are. Unfortunately for the bees, this research started by ruining their day.

In 2011, scientists started looking at how to put a bee in a bad mood, and how the bee might demonstrate their case of the Mondays. Bees were first trained to associate specific smells with tasty food or repulsive quinine. Some of these bees were shaken in a machine called the “vortexer,” basically to significantly irritate them, but without injury. Neutral and presumably upset bees were then offered new smells, some of which were blends of the two tastes they were trained on. Normal bees gave some of these new options a shot and took a sip, but the bees that were having a bad day were much less likely to try anything new. It appeared that their unpleasant experience changed the bees neurochemistry enough to change later behavior that was unrelated to the shaking itself.

More recently, luckier bees were tested for their optimism. Like the earlier study, bees were first trained to expect food from a fake blue flower, while getting nothing from similar green flowers. Rather than getting knocked around, some of these bees were given a small sugar-water cocktail, then allowed to react to a ambiguously-colored flower. Bees previously treated to sugar were more likely to investigate the new option, while neutral bees just flew around without interest in the unclear flowers. It seemed that, in a reverse of the vortexer experiment, the sugar put the bees in a good mood, making them more likely to optimistically explore new food sources.

At this point, parents of small children will feel like they’ve seen this mood shift after their kids eat desert, but note that it also accompanies a bit of a hyper-active energy boost as well. Since the bees’ supposed optimism might have just been the result of extra calories to burn, researchers tried to isolate these factors as much as possible. They noted that the bees that didn’t investigate the ambiguous flowers didn’t actually fly less than the sugared-up bees, they just didn’t fly towards the unknown flower. In a second phase of the test, bees were also grabbed by a mechanical arm to simulate a crab spider attack, and observed that the upbeat bees bounced back from this stress faster than the control group. Finally, bees were drugged to stop their brains’ absorption of the neurotransmitter dopamine, which is associated with motivation and reward in mammals. At that point, the sugar seemed to make no difference to the bees’ behavior, even though the extra calories would have obviously been available all the same.

Not necessarily cognizant of their condition

This might seem like a lot of effort to prove a bee can have a good or a bad day. Part of the reason for this is that for a long time, due to brains lacking some structures you find in mammalian brains, insects and other invertebrates were assumed to be incapable of emotional responses. Even with this evidence, researchers are still careful to specify that these behavioral changes are tied to physiological responses and not feelings. You may be aware of something scary and know that you feel scared, but the emotional response is when your heart rate increases and your pupils dilate. So bees might be experiencing a sense of pleasure and reward when offered some sugar water, but at this point we’re not saying they’d say it makes them feel happy.

Either way, shaking them in a box like a badger is probably a bad move.

Source: I’ll Bee There for You: Do Insects Feel Emotions? by Jason G. Goldman, Scientific American