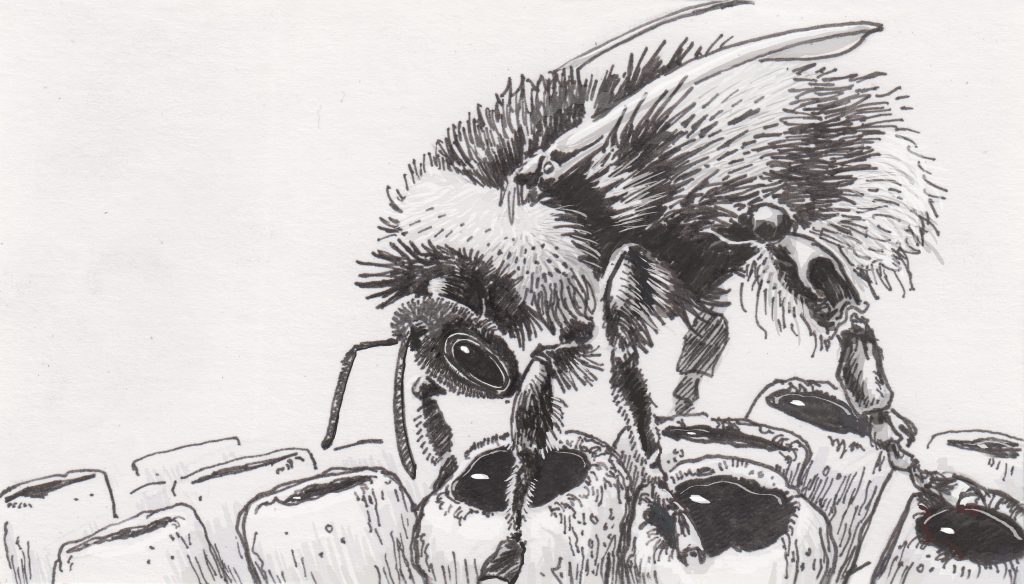 Sugar significantly slows how quickly bumblebees can barf up their nectar

Like you, bees are attracted to sweeter, more sugary food. Some species even have specialized taste buds to help them appreciate the sugar in nectar in ways most 10-year-olds could only dream of. However, researchers have found that this sugar-collection has a drawback most of us thankfully don’t have to consider when eyeing our next dessert or soda: the cost of vomiting it back up.

Too viscous to vomit?

When a honey or bumblebee like Bombus terrestris forages, it’s collecting food for itself and it’s family back at the colony. Sometimes pollen is mixed in to provide larvae with extra protein, but sugary nectar is bee’s primary source of energy. From that perspective, it would be fair to assume that a foraging bee would want to maximize each trip to a flower by collecting only the highest-sugar nectar, allowing it to deliver more sugar per flight.

The catch is that sweeter nectar is thicker and therefore slower to transfer into, and later out of, a bee’s digestive tract. Higher sugar concentrations make the nectar more viscous, which is then a bit slower for a bumblebee to lap up with its tongue, and then significantly slower for it to regurgitate back at the hive. In lab experiments, more sugary nectar could push a bee’s period of vomiting from a few seconds to nearly a full minute. It isn’t known if the bees find this process uncomfortable, but the numbers add up in a way that makes the bees less efficient. While extra sugary nectar may have more calories per delivery, its not enough to make up for all the time lost barfing it back up. For species that sip their nectar up instead of lap it, like Orchid bees, sugary nectar is even slower— imagine sucking, and then expelling, a thick syrup through a drinking straw.

Unfortunately, we can’t really communicate these findings to the bees directly. Instead, researchers hope that this will inform farmers about which plants will help make bees more efficient pollinators. While there are many pollinators in the world, humans often depend on a subset of species, like honeybees, many of which have seen declining populations in recent years. To help the remaining pollinators be as effective as possible, growing more plants with optimal sugar levels in the nectar should help bees spend hit their sweet spot between gathering nutrition and puking it back up.

Source: Vomiting bumblebees show that sweeter is not necessarily better by University of Cambridge, Phys.org