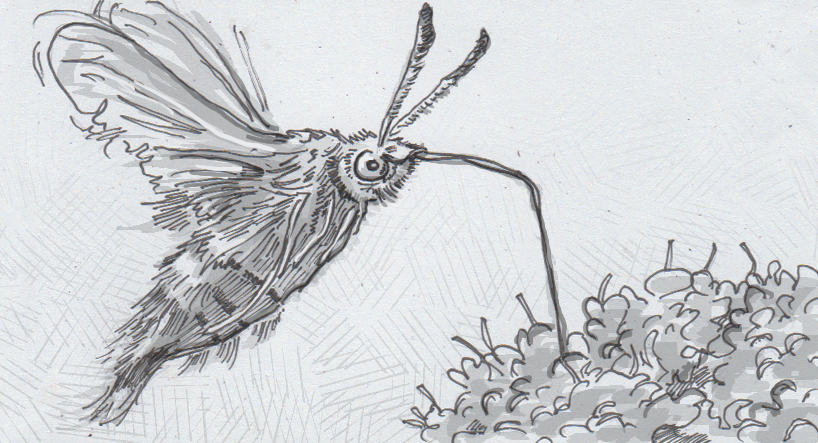 Sugar-slurping hawkmoths synthesize their own supply of antioxidants

As much as my kids don’t want to hear it, you can’t survive on a diet composed only of sugar, partially because you are not a hawkmoth. Hawkmoths, like hummingbirds, live entirely on nectar from flowers, which is essentially like guzzling 80 cans of soda for each meal. This leaves them with a ton of carbohydrates to power their highly aerobic flying and hovering, but it also leaves them from no protection from the damage that activity wreaks on their bodies. Or at least it should, if they weren’t hawkmoths.

The concern in this case isn’t muscle tears or sprains, but the oxygen that gets released during metabolic functions in the moths, and other animals’ bodies. Some of that oxygen gets packaged as carbon dioxide and exhaled, but some oxygen can end up causing damage to our tissues if it can kick off chemical reactions with molecules otherwise assigned to biological functions in our cells. To fend off this kind of damage, our bodies harness vitamins, minerals and flavonoids that we collect from the fruits and vegetables we eat. Nectar-sucking moths, on the other hand, aren’t taking in any antioxidants, which seems like a problem when you’re one of the most metabolically active animals in the world.

This apparent conflict was so pronounced that researchers from the University of Arizona and New Mexico State University thought that their equipment might be damaged. The recorded amounts of oxygen and carbon dioxide the moths processing as they flew literally didn’t add up, suggesting that they were doing more than just exhaling spent oxygen and carbon. The answer turned out to be tied to all the nectar they consumed, which the moths were able to do more with than just get a sugar buzz.

When the moths are flying and eating, they use some of their consumed sugar to create their own antioxidants. They send a portion of their meals through the pentose phosphate pathway where it’s repurposed to capture excess oxygen released from all that flapping and flying. Other living things, from humans to bacteria to trees, have a similar pathway, but the moths are the first animals known to have evolved this specialization. However, some other marsupials, mammals and birds have been found to exhibit similar ratios of exhaled carbon dioxide as the hawkmoths, which suggests that creating antioxidants may be more common than anyone thought.

In the mean time, I’ll still be pushing kale over cola for my kids, because, as I said, they’re not hawkmoths.

Source: The value of nutrition and exercise, according to a moth