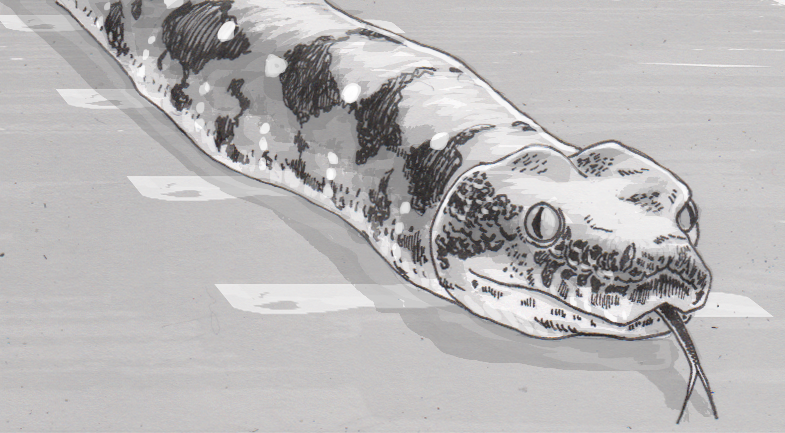 At long last, one snakes’ defining abilities has been explained. While not quite as flashy as venomous fangs or heat-detecting sensory organs, a snake’s ability to crawl forward in a straight line without bending its body is a trait that was probably instrumental in their evolution, as it enabled them to invade the burrows of their prey more easily. As it turns out, scooting along without scrunching up isn’t such a straightforward process.

To measure exactly how a snake engages in “rectilinear locomotion,” or crawls in a straight line, researchers needed to measure their movements both inside and out. Boa constrictors were outfitted with electrodes for an electromyogram (EMG), which could keep track of the electrical impulses sent to different muscle groups in the crawling snake. While those readings kept track of the exact sequence of muscular activities inside the snake, it was also filmed while wearing reference markers on its skin, similar to motion-capture suits used in special effects. The combined data let researchers piece together exactly how the boa would manage its movement as it moves through the jungle.

Most of the propulsion is thanks to the snake’s abs. The skin along the stomach was seen to stretch forward in sections, followed by the muscles along the ribs and spine. Sections of the snake’s belly would “reach” forward at a time, almost like a pulse of movement that would start at the head then continue down towards the tail. Even though each muscle group would be making discrete cycles of movement, this activity was so coordinated that the backbones actually end up moving at a constant speed.

Sliding and sticking with scales

Previous studies have found that belly-flexing is likely aided by a snake’s scales. By dragging snakes across different surfaces, researchers found that the stomach scales reduce friction when moving forward, but resist sliding backwards. While a treaded stomach would greatly complement the belly-flexing motions measured with the boa constrictor above, it’s still only part of how a snake can maneuver. They were also found to employ “dynamic weight distribution,” wherein they can control which part of their body is pressing against the ground the most, further gaining traction while reducing friction at the same time. That movement may play a role in rectilinear locomotion, but it likely plays a bigger part in snakes’ other forms of slithering, like sidewinding and serpentine motions.

A boost to biomimicry

This understanding of snake movement is good news for robotisists. A snake’s ability to move through narrow spaces to catch prey makes them a great model for robots that need to investigate pipelines or look through rubble to find disaster victims. Those robots probably don’t need to worry about imitating a boa’s constricting motions, but being able to reliably crawl forward in a space just wider than their mechanical bodies would be of great use to engineers.

Source: Researchers explain how snakes can crawl in a straight line by Michael Miller, Phys.org