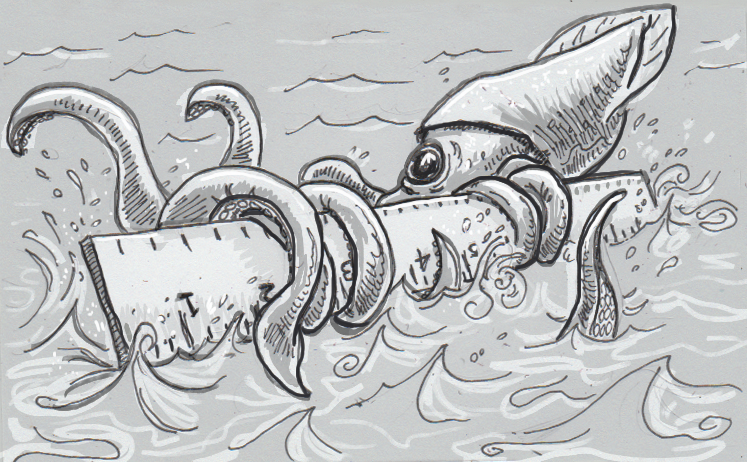 One of the best preserved giant squid specimens is in the American Museum of Natural History, weighing a few hundred pounds with an overall length of around 30 feet. Which is longer than an elephant, a saltwater crocodile, or even a good-sized dinosaur like Triceratops horridus. But since giant squid turn up in stories as having attacked large ships, or wrestled sperm whales to their deaths, a 30-foot-long sea creature somehow seems like it’s missing something. Couldn’t they be…you know…bigger? A recent survey of all the sightings and samples of Architeuthis dux has good news for lovers of truly monstrous wildlife, estimating that the maximum size for giant squid may have been as long as 88 feet.

This estimate was difficult to put together, mainly because getting reliable data on A. dux isn’t easy to do. They live all around the world, but mainly at depths that aren’t widely explored, leaving us with very few confirmed sightings in the wild. Stories of encounters with ships sometimes led to extreme outliers, and so reports of squid nearly 200 feet long weren’t included in these calculations. However, with only 460 samples over hundreds of years to work with, not every measurement was expected to be perfect, especially considering how hard it is to measure a squid in the first place.

A large complication is that squids lack skeletons, so their dimensions are more flexible than your average crustacean or vertebrate. Giant squids’ bodies that get removed from the sea don’t always maintain their original dimensions, as shorelines and museums just can’t offer the same amount of water pressure these cephalopods normally experience in the oceans’ twilight zone. Once a squid’s corpse has been found by people, they’ve also been subject to damage, decay and some overly-enthusiastic stretching to maximize their lengths. Even if a specimen is responsibly measured, there’s a question of how representative it is of the whole species. For example, while members of A. dux are roughly the same size, they have a degree of individual variation in length, just like any other animal. To try to accommodate all these factors, researchers focused on things the size of the squids’ bodies (or mantles) and less squishy bits, like their hard beaks. Assuming that members of A. dux would keep those pieces of anatomy proportional to their overall length, researchers then calculated what the maximum size of these squid might be.

The final figure isn’t expected to be perfect, but it’s worth noting that its definitely longer than any squid specimen anyone has in their possession. This isn’t just to one-up other giants of the sea, but rather to allow for growth beyond what we’ve actually found first-hand. Statistically, with A. dux living around the world, the odds that the 30-foot specimens in human possession are also the largest the species can offer just doesn’t make sense. With that in mind, and looking at the animal’s anatomy and ecology, it’s not out of the question for record-breaking individuals to be lurking somewhere in the sea.

Even if this estimate is one day confirmed first hand, it still wouldn’t make A. dux the biggest squid out there. That title will probably remain with the colossal squid, Mesonychoteuthis hamiltoni. Nobody is looking at M. hamiltoni to stretch more than 50 feet long, but they have much shorter, thicker proportions than A. dux, putting their maximum weight up to 1,650 pounds. So while shorter in overall length, the mantle and beak are bulkier than other cephalopods. The eyes truly win the crown though, as they’re estimated to be the biggest of any animal on Earth, with 12- to 16-inch diameters on a captured specimen.