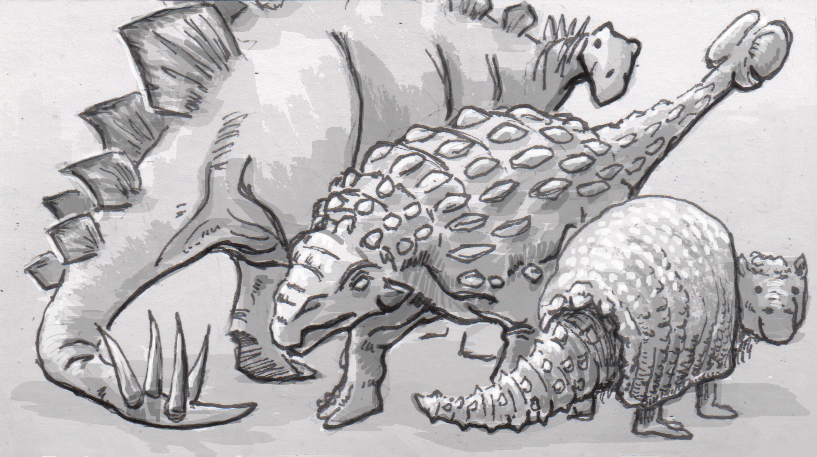 It’s hard to fight with your rear end. Aside from a creature like a horse chasing away flies with its tail, few creatures can be said to be more intimidating from behind. There are exceptions to this rule, and they’re unusual enough that researchers have studied every tail-swinging tough-guy to see why those species evolved to fight with their rears instead of their claws or faces. Even though using one’s head or limbs would seem perilous in its own way, the number of anatomical requirements needed to make a tail weapon functional may have curtailed (ahem) their popularity in both living and extinct animals.

There’s obviously some variety to how a weaponized tail can operate. Dinosaurs like Stegosaurus carried spiked thagomizers, while some ankylosaurs ended up with bludgeoning clubs. Living species are generally a tad less ornamented, but the quills on a porcupine or the speedy snap of a monitor lizard’s tail can still make a foe think twice about attacking. Once a list of 286 species was assembled, researchers categorized them by an array of traits, from diet to size to the presence of bone or spikes on the tail’s tip. At that point, the data could be sorted and sifted to find what common threads united the reptiles, mammals and dinosaurs that have ever purposely backed into a fight.

Two traits proved to be universal among all the tail-swingers. Every animal that did battle with its rump was an herbivore, and as such these weapons weren’t being used for hunting. Most living species with dangerous derrieres only use them defensively, although exceptions, like rainbow agama lizard, pick fights to compete for mates. Still, it seems that teeth and claws have an edge (sorry) for predatory activities, beating out clubbed behinds as the anatomy of choice for predators around the world.

Other traits that were tied to tail weapons weren’t quite as obvious. Creatures with enlarged tail tips, like Ankylosaurus, Glyptodon or Shunosaurus, were all huge, with specially formed vertebrae in their tails. Stiff tails seem to require a smaller minimum body size, but shared a likelihood for osteoderms, or bony skin armor. Tail spikes, such as those found on a Stegosaurus or meiolaniid turtles, were tied to more head ornamentation, wide hips and some kind of bony but discontinuous armor on the torso. All the extinct species were also found to share osteoderms enveloping their tail tips, as well as an unusually stiff trunk, possibly to provide better leverage for lateral tail-swings. Living backside-battlers still follow many of these rules, although the minimum size requirements have shrunk down to around three feet in length since the age of dinosaurs.

Putting these parts in perspective

This may seem like a very roundabout way to describe animals we already know of, but organizing these traits helps bring a few things into focus. Requirements like stiff bodies and protective skin covering had to evolve before tails were weaponized, since a tail club or spike is the less common feature, and there’s evidence that anatomy like osteoderms actually fused together to create those weapons in the first place. However, most large herbivores found other ways to protect themselves before actually developing a rear-mounted defense mechanism. This isn’t to say that tail weapons were ineffective at their jobs, but that they require so many other anatomical conditions first, they’re very unlikely to evolve in the first place.

It also seems that, as cool as a tail bludgeon or thagomizer may have been, the complete package of bulk, armor and bone didn’t necessarily out-compete other forms of defense once they were assembled. Instead, brawling with one’s butt remains a bit of a niche adaptation that evolution keeps playing with, but rarely fully commits to.

Source: Where did all the tail clubs go? by Victoria Arbour, Pseudoplocephalus