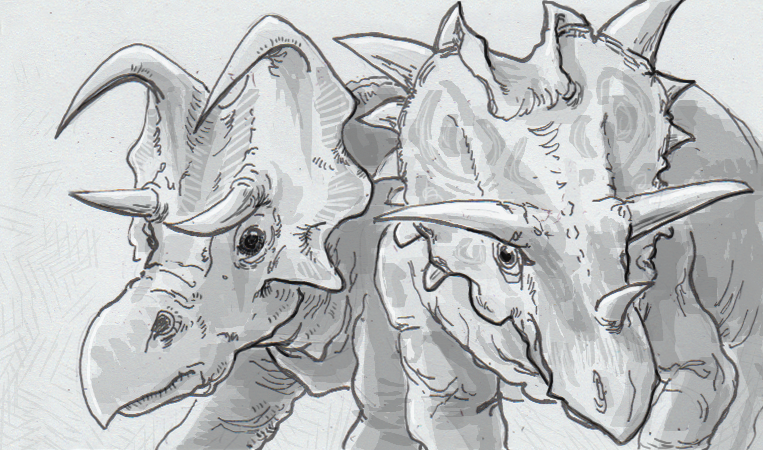 A dinosaur like Triceratops seems primed for battle, with a bone frill shielding its neck and up to eight-foot horns jutting out towards potential adversaries.  Two newly-announced relatives seem ready to up the ante, with names meaning “bent sword” (Machairoceratops cronusi) and “spiked shield” (Spiclypeus shipporum). It might seem that these two species, with their barbed, imposing heads were straight out of the gladiatorial pit, but in reality these spikes may have been largely for display. At a minimum, both animals add to the diversity of the Cretaceous landscape, fleshing out the ceratopsian family tree.

While sword references sound quite militaristic, the emphasis in M. cronusi’s nickname should probably be on “bent.” At the top of the animal’s bony frill were two prongs that jutted forward nearly perpendicular to the frill itself. They had a curve to them, almost resembling the blade of a scythe in profile. But despite the number of bladed instruments one might reference, they’re not really situated or reinforced enough to be reliable weapons against a serious foe. Like a deer’s antlers, they could probably cause injury to a foe, but were most often used for display and the occasional tussle for dominance in the herbivore’s herd.

Aside from the spectacle of these structures, paleontologists are interested in how M. cronusi fits in the centrosaurine lineage. Centrosaurines are a subfamily of ceratopsians, usually noted for large, beak-like snouts, facial horns and decorated frills. Importantly, centrosaurine dinosaurs are usually found in Canada and Alaska, whereas M. cronusi, along with Diabloceratops, helps establish these animals as far south as Utah.

So if our “bent sword” wasn’t a necessarily a brawler, what can be said of the “spiked shield,” Spiclypeus shipporum? Fans of ferocity will likely be equally disappointed, because S. shipporum doesn’t appear to have been an aggressive warrior either. Unlike M. cronusi, S. shipporum was a chasmosaurine, which are usually noted for striking brow horns and less adorned frills. In this case, those brow horns jutted out to the sides of the head, rather than forward like on a Triceratops. The frill was also unusually spiky, with some barbs pointed forward, some back, and some to the sides. But with barbs pointed every which way, this headgear was likely used more for show, without as much deployment in regular combat.

This isn’t to say that  S. shipporum was without some signs of hard living though. The dinosaur’s front left leg was injured to the extent that the animal may have had to hobble around, without putting weight on it. There was some speculation it this may have (finally) been signs of violence, possibly from another member of the herd, but analysis pointed to most of the damage being a form of infection and severe arthritis.  This particular specimen was found to have been at least 10 years old, indicating that it lived with this ailment for quite some time, with no lasting signs of problems with horns, swords, or any other spiked implements.