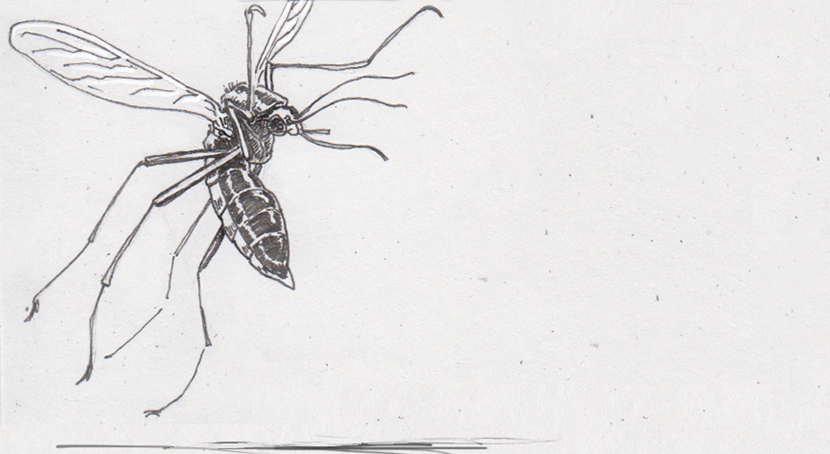 In addition to keeping your guts in, germs out and providing a convenient canvas for tattoos and scars, your skin is your body’s largest sensory organ. It’s loaded with different types of nerve cells to pick up tiny changes in pressure that might spell trouble for your body, from a cactus needle to a parasitic insect. Unfortunately for us, insects like mosquitoes have evolved adaptions to our epidermal warning system, giving them a chance to sneak in a bloody snack without drawing our attention.

When a mosquito “bites” you, it’s actually piercing your skin with its proboscis. In insects like butterflies, the proboscis is a long, delicate tube that is used to suck up nectar from a flower. In a mosquito, it’s a bit more weaponized, and is actually a sheathed set of six thin needles called stylets. Two stylets have tiny teeth to cut through the skin, but they’re sharp enough that they can slip between your skin’s sensory defenses. The next two stylets push the incision open, followed by a labrum that senses for blood vessels.

Finally, the hypopharynx covers the top of the labrum to make it into more of a tube, as well as drip drool back into your incision. In addition to passing pathogens to our bodies, the drool keeps the blood from coagulating, or clotting, too quickly. This allows the mosquito to get her fill of blood cells, even taking the time to poop out excess water while she sucks.

A mosquitoes departure is no less specialized, as all that blood would go to waste if we detected the parasite and squashed before it could escape to lay eggs. Many insects, and birds and probably pterosaurs, kick-start their flight by pushing off the ground, or skin, with their legs. By catapulting themselves into the air, they save their wings some work and get moving faster. The catch is that they’re exerting all the force of their liftoff in one quick movement, which means that that force feels more punctuated and noticeable to your skin.

To make their departure as gentle and subtle as possible, mosquitoes shift the work to their wings. 61 percent of a mosquitoes liftoff is powered by its wings, which get to push against the air instead of your skin. Their longer legs than the average fly allow them to push with the same amount of force, but that force can be spread out over a longer amount of time. All these adjustments soften the impact of mosquito take-offs, but without sacrificing speed compared to other flies. The one catch is that a belly full of blood does weigh them down a bit, as they move around 18 percent slower in the air than unladen insects. This means a mosquito’s final escape is just less than one mile an hour, although we’re usually too distracted by the histamine-induced itching to notice.

Source: The physics of mosquito takeoffs shows why you don’t feel a thing by Mariah Quintanilla, Science News