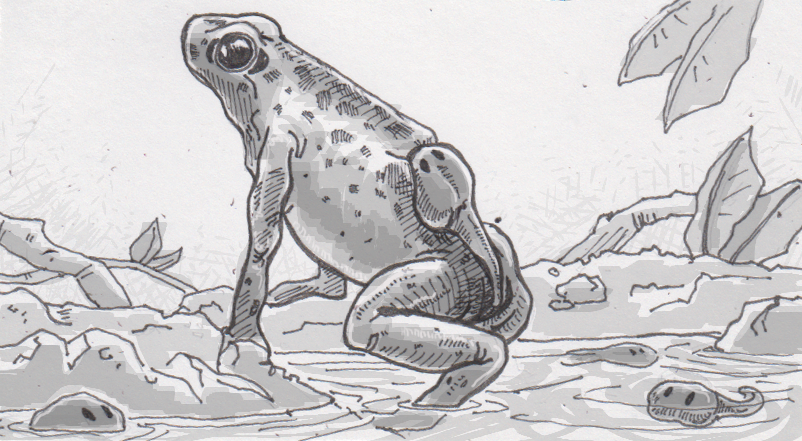 Even the hungriest tadpole wouldn’t suggest that they could “eat a horse,” but they might consider munching on their brothers and sisters. For all the accounts of how tadpoles grow limbs and lose their tails to mature into frogs and toads, they often gloss over the fact that these little amphibians need to eat, just like any other animal. They generally prefer small fare like algae, insects or even brine shrimp over each other, but to growing big in a small pond can sometimes push diets to the extreme. Fortunately for vulnerable siblings, mom or dad can sometimes come to the rescue.

Tadpoles often have to share a small pool where resources can be scarce, especially that that pool is at risk of drying up. As conditions become more tense, poison dart frog tadpoles have been observed eagerly trying to get onto their parents’ backs if an adult enters the water. No cues or participation were noted on the part of the adult frogs, but tadpoles seemed very intent on getting a ride away from stressed, hungry siblings. The offspring seemed to be more aware and concerned about their lack of resources, and were taking things into their own hands, er… stubs.

Avoiding feeding on the family

Obviously, eating one’s kin isn’t a common strategy among frogs other other animals, although it’s not unheard of either. The conditions that seem to encourage eating one’s brothers and sisters are basically the threat of starvation coupled with a shrinking environment in the form of evaporating water. The tadpole that can secure more nutrients might mature faster and thus be ready to move to a more accommodating location before it’s too late. That might come at the expense of one’s siblings, but eating them just isn’t that big of a boost.

Tadpoles have been observed eating each other as a true last resort. Competition and starvation seemed to be the only things that made eating kin attractive, as otherwise the tadpoles ate every other available option, right down to cornmeal which isn’t a common staple for animals that live in the water. In the end, eating each other wasn’t even found to be terribly helpful— eating brine shrimp seemed to spur growth more than eating tadpole meat. So the tadpoles fleeing on their parents’ backs may be doing everyone a favor by spreading the family out before anyone gets too hungry.

Source: Tadpoles Turn to Cannibalism Only When Desperate by Laura Poppick, Live Science