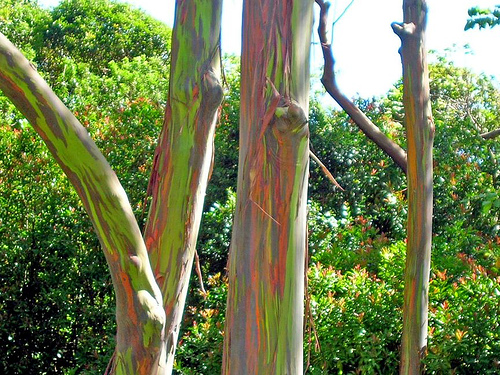 As the name implies, the rainbow eucalyptus looks like something out of a kid’s cartoon show, or maybe a painting by Cézanne. Rather than colorful leaves in the fall, or bright flowers in the spring, this tree’s trunk displays bright greens, blues, purples and reds. While it’s certainly caught the attention of people who have started growing it for this whimsical appearance, it does beg the question as to why this tree grows so differently from its more earth-toned peers?

Green on the inside, red, orange and purple on the outside

There are a number of components to the rainbow eucalyptus (Eucalyptus deglupta), starting with the bark of the tree itself. The bright greens are the result of high concentrations of chlorophyll in the plant, and they become visible when outer layers of bark fall or are stripped off. Each layer is incredibly thin, making them translucent enough to expose underlying tissue and colors from deeper in the tree, leading to these bright greens. As the bark ages, it accumulates more and more darkly-colored tannins, which are the same molecules that give red grapes their color (and red wine some of its flavor). Plants produce tannins as a deterrent to pests, as the strong taste acts as a warning to insects biting the plant, similar to the bitterness in brassicles. The combination of the green chlorophyll with layers of tannin-imbued bark then creates the multi-hued appearance that earned the tree its name.

If that explains where the color comes from, it doesn’t fully address why the rainbow eucalyptus grows this way in the first place. As far as we can tell, the rainbow effect is attractive to humans, but not necessarily a huge benefit to the tree in other ways (as it attracts pollinators to its flowers, not trunk). Instead, the colors may just be a happy-looking byproduct of other adaptations. The thin, easily removed bark is likely a way to allow the tree to grow faster. As the tree’s trunk climbs skyward, the bark gives way easily enough to avoid stunting growth, which can be up to three feet a year. While this explains some of the patchiness of coverage, it doesn’t fully explain why the bark is so unusually thin it lets color through.

The thin bark might be the result of evolving in a wet climate. As a native of the Philippines, rainbow eucalyptus’ thin bark probably allows them to cycle water quickly, as well as aerate the trunk when the soil may be soggy and flooded. Since humid environments are also good breeding grounds for potentially dangerous fungi and bacteria, easily discarded bark might be a way to jettison pieces of the tree before they infect the whole trunk.

If these environmental pressures are the cause behind the beautiful bark, they may also explain why the tree is sometimes noted as being less colorful in non-native environments. People have successfully imported them to Australia and southern California, but it seems that they’re not quite as bright as when they’re growing at home.