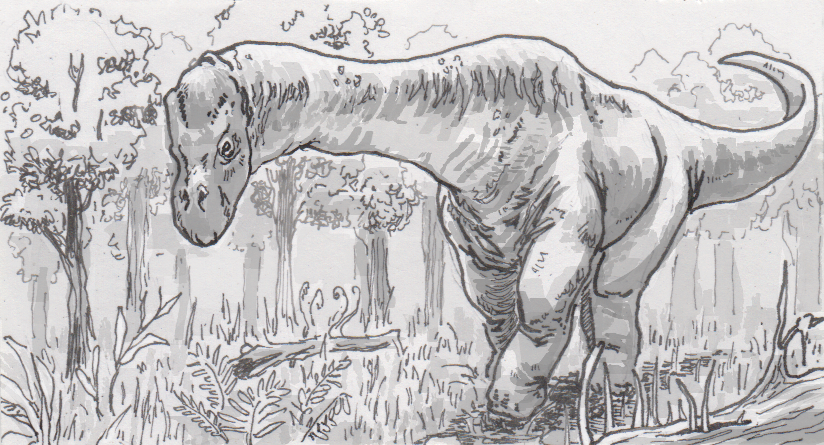 Shingopana songwensis was a bit of a misfit. The newly described titanosaur, a subset of long-necked sauropod dinosaurs like Apatosaurus, didn’t check all of the boxes some of it’s more famous relatives did. S. songwensis was not mind-bogglingly large like Patagotitan mayorum, weighing in at only five tons instead of 69. It didn’t have the cool armored scales found on titanosaurs like Rapetosaurus krausei. In fact, analysis of S. songwensis‘ anatomy suggests that the lumbering creature didn’t even live near it’s own relatives, having been trapped on the wrong side of the growing Atlantic ocean over 70 million years ago.

Titanosaurs were found all over the world, having once had the opportunity to walk everywhere. When the world’s land masses were joined in one large supercontinent called Pangea, the southern mass of land called Gondwana included what is now South America, Africa, Australia and Antarctica. This allowed animals like dinosaurs to roam and proliferate near and far, at least until the land masses started to break up in the Jurassic period, around 184 million years ago. At that point, animals like the titanosaurs were split by geography into smaller groups, eventually leading to new, separate species and traits specific to particular lineages.

The best explanation is that S. songwensis was somehow isolated in South Africa, away from the titanosaurs living in North Africa at the same time. While some creatures did partake in rafting to move between South America and Africa, S. songwensis seems to have simply been trapped in it’s own geographic, and thus genetic, pocket, somehow holding on to traits it’s ancestors brought out of South America. This would fit with the fact that South Africa separated from South America before North Africa did, with the Atlantic Ocean expanding from the south toward the north. The isolation was probably reinforced by other climate or geographic features, keeping these orca-sized titanosaurs away from more closely related family members.