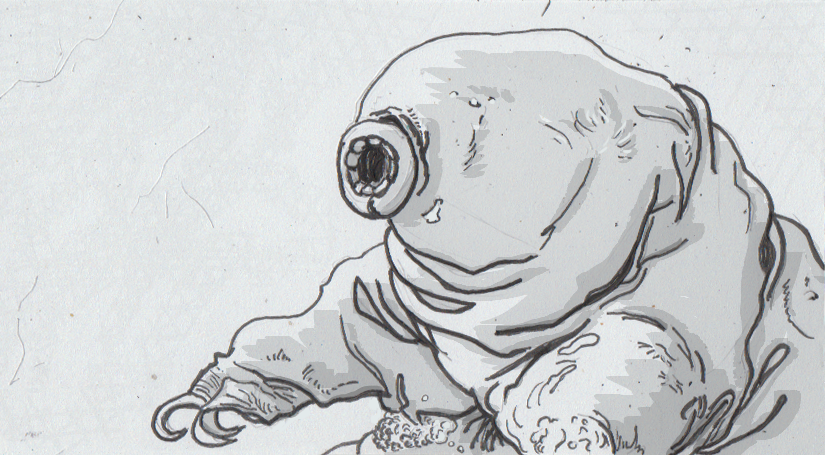 Tardigrades found to consist of only their cranium

Tardigrades are often celebrated for having the most durable body on Earth. The tiny arthropods, also known as water bears, can survive everything from radiation exposure to the vacuum of space, even being able to curl their bodies up in a state of suspended animation to cope with dehydration. However, the above is based around one big lie about tardigrade bodies, because they don’t really have bodies. Genetically speaking, tardigrades are nothing but impervious, walking heads.

To understand how you end up with tiny, genetically-disembodied heads, you need to consider “Hox genes.” With DNA for an entire body in each cell, it’s important that new tissue access the right genes at the right part of the body. Hox genes regulate this filtering process, ensuring our body is assembled in the correct orientations. When Hox genes go wrong, you can get malformations like unwanted limbs, or an ovary growing teeth, a prize my high school biology teacher kept in a refrigerator next to her lunch (it wasn’t hers.) Hox genes can mutate in the other direction too, stopping an animal from growing normal appendages, or in the case of our tough little arthropods, body segments.

When looking through the genome of the tardigrade species Hypsibius dujardini, researchers realized that they were built entirely from the DNA originally intended to be some ancestor’s head. No genes for abdomens or proper limbs were even present, much less being expressed. They assume at this point that ancestors of modern tardigrades used to be longer, looking more like other arthropods. Burrowing in the ocean floor, a long body may have been a liability by being harder to hide, and when a Hox mutation dropped some body segments, it proved to help more than hurt, and started getting passed on. Over time, ungrown portions of the body didn’t really need unused DNA to be carried further, and so that was eventually dropped too.

Of course, tardigrades today don’t look like worms or mouthed-lumps, so where do their current legs come from if their ancestors jettisoned their limbs with the unwanted body segments? Those current legs may be converted, or rather reclaimed mandibles and antennae. It’s thought that modern arthropods actually got their mouthparts and feelers by converting limbs to new uses, and so in this case, tardigrades are just putting those head adornments back to their original use.

Source: Tardigrades Are One Giant Head by Elizabeth Preston, Inkfish