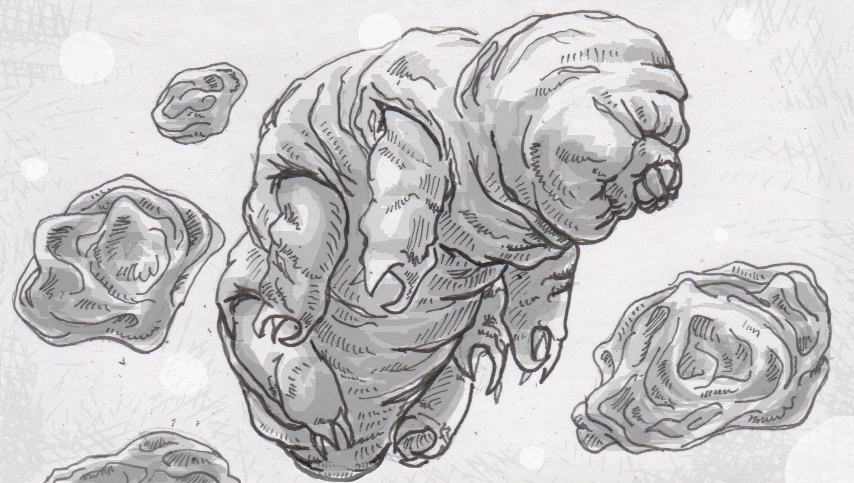 One of the problems with living in a droplet of water is that it can dry up in a hurry. Even a puddle or pond isn’t terribly reliable, which naturally causes havoc for the various flora and fauna trying to make the most of their watery home. Some bacteria and fungi can ride out the dry spells by making a special sugar called trehalose, which protects delicate structures inside their cells until their environment is rehydrated. Tiny tardigrades, also known as water bears, were thought to employ this sugar as well, but it turns out that that would be too mundane a solution for animals famed for their extreme survival abilities. Instead, it looks like tardigrades survive with unique proteins all their own: tardigrade-specific intrinsically disordered proteins (TDPs).

When a tardigrade’s environment is drying up, they’ll face problems with mobility and finding food, but the immediate concern is that the lack of water will destroy individual cells in their bodies. Water is a key component to life on Earth, helping house sensitive organelles in our cells, like mitochondria or ribosomes. When water isn’t there to help support the cytoplasmic fluid inside each cell, membranes crack and delicate proteins lose their shape and become entangled in a biologically useless mess. At the center of the cell, DNA will begin to break apart as well, all of which kills the cell and larger organism.

Tardigrades survive this decomposition by preventing it before the damage is done. The TDPs normally float around in kind of formless blobs when they’re not needed, but as water molecules become scarce, special genes kick up their production so they can go to work. The TDPs begin to solidify into a glassy structure that’s less orderly than your usual solid crystal, but firm enough to to lock delicate cellular structures in place. Instead of breaking and folding into each other, the inside of the cells are encased and thus inert, waiting for water to be reintroduced to the tardigrade’s body.

Protection outside the organelles

On a larger, Ok– 1.5mm, scale, the tardigrade will follow a similar pattern. As it begins to lose water, it will fold itself up into a more compact ball, called a “tun” state, so it can wait for water with less risk to its anatomy. This involves retracting their head and limbs into the body, leaving the resulting lump looking a bit like a microscopic raisin. This response is also seen when tardigrades are in extreme cold, as they end up losing nearly all of the water in their bodies.

The genes to create TDP have been isolated, which means they might not be unique to tardigrades much longer. Researchers successfully engineered yeast and bacteria to make use of TDP genes, at which point those organisms were also able to survive dehydration. The hope is that these proteins might someday help protect everything from corn to vaccines, all of which currently rely on more costly freezing processes for preservation.

My second grader asked: Is this how tardigrades survive freezing too?

It seems like it should be? Tardigrades have been thawed out after 30 years in deep freeze storage, where they were in their compact tun state which would suggest they had deployed their TDPs. It’s assumed that a lot of their durability, including some seperate mechanisms to repair DNA damage, evolved to deal with dehydration and just happened to be great at everything else. The only catch is that any water that could somehow freeze might damage cells by forming sharp ice crystals, but prehaps the glassy TPDs can contain any stray H20 as well.