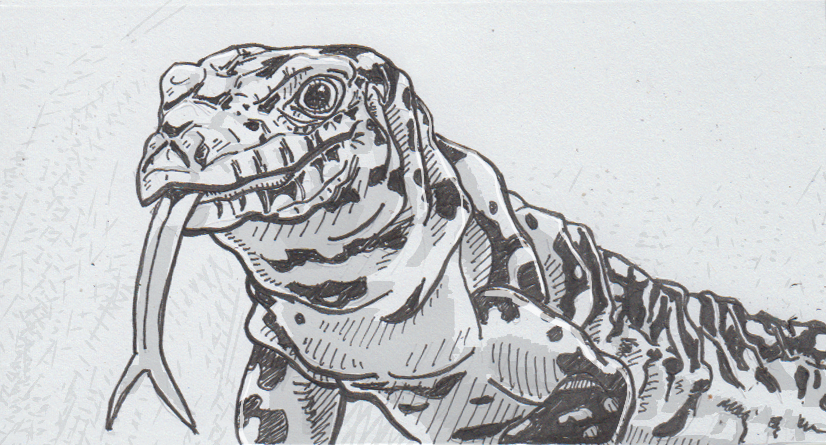 Reptiles, like lizards, are ectotherms. They’re cold-blooded, which usually means they’re as warm or cold as the environment around them. Depending on when you’re looking, that is. While tegu generally follow the cold-blooded concept of being warm in sun and cool in the shade, scientists recently discovered that in the privacy of their burrows, for a few months a year, the lizards seem to forget this fundamental concept of reptile physiology and start pretending to be warm-blooded instead, warming themselves up at the start of their day.

The Argentine black and white tegu (Salvator merianae) use burrows as a way to retain heat overnight, avoiding dropping to the surface temperatures of the South American night. They then go further than this from September to December, somehow raising their body temperature by as much as 10° Celsius. They didn’t seem to be shivering, which is a trick employed by female pythons to warm their eggs, and were thought to maybe be using a hormone to increase the metabolic rate of their liver or heart. Whatever the trigger, it somehow stood up to isolation from both sunlight and food stimuli. Researchers were actually so surprised by this endothermic (internally heated) activity that they actually extended the study to three years of observations to ensure they hadn’t somehow mismeasured what was happening.

Aside from pinning down exactly how the tegu are warming themselves is the equally important question of why. Generating your own heat requires a lot more energy then passively absorbing it from the environment, which is no small trade-off to make. It’s actually been a question about the origins of warm-blooded animals like birds and mammals, since the earliest endothermic animals likely had to burn extra calories before it was terribly efficient for them to do so. Fortunately, the short duration of the tegu’s boosted temperatures may provide a clue about those ancient circumstances.

Reason in the season

September through December are the tegu’s mating season, and having a boosted metabolism during that time may be worth the extra calories. The energy would might help speed up reproduction. Furthermore, the pumped metabolism might also allow the animals to be more active with their young, a bit like all the coffee I drink when I’m playing with my kids in the morning. Some researchers feel that this cannot explain the full range of complex changes needed for the advent of warm-blooded creatures, but it’s one of the few transitional models we can observe today.